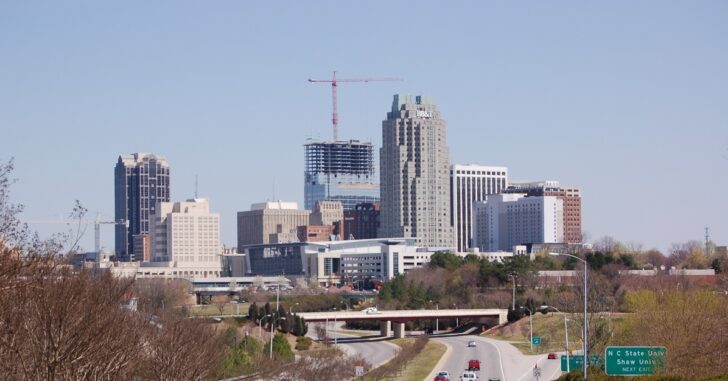 RALEIGH, NC — A thug was hoping to make some easy money late last month in a crowded area in one of North Carolina’s most populous cities, but things didn’t work out too well for him, WRAL reports.

For his trouble, he got both shot and arrested — a sad end to anyone’s afternoon.

Jonathan Tyrone Peace, 28, has been charged with common law robbery in connection with the incident Thursday in the 300 block of South Blount Street around 3 p.m., police said. He suffered a gunshot wound to the chest and was rushed for medical treatment to WakeMed. Information about his condition was pending.

Police said Morgen Matthews, 23, was walking on South Blount Street when Peace tried to rob her. She fired her weapon to stop him from attacking her, police said. She remained on the scene until police arrived, authorities said.

A man who said she was Matthews’ boyfriend showed WRAL News a cell phone text from the woman as the event was unfolding. In it, she asks the man to come downtown because she had been attacked. Initially, witnesses at the scene had told WRAL News that the man and woman had argued before the woman allegedly opened fire and shot the man…

He said once the woman fired her gun, she dropped it, and someone inside a nearby restaurant retrieved it before turning it over to police. The caller said the woman was “violently accosted” before she fired the gun… On Friday, visitors to the area expressed support for the would-be robbery victim.

“You need to protect yourself,” one man said. “And if that’s your avenue of doing it, then that’s what you need to do.”

A word to the wise, here — any altercation that will involve guns fired will be traumatic. That doesn’t mean you can safely — or should — just drop your firearm in such a way that someone else can retrieve it.

When police arrive on scene, have your firearm set down on the ground in clear view. You will not appear a threat to law enforcement while still being the closest person to the firearm in case of a deepened emergency.

Stay safe out there, folks, and thank God for the equalizer.