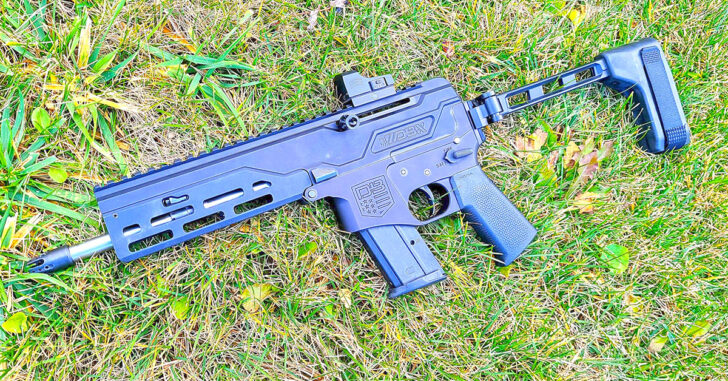 Diamondback Firearms recently released their newest firearm to the market called the DBX 5.7. It’s a small and lightweight sub-gun chambered in 5.7x28mm. It weighs just three pounds unloaded and measures just an inch thick throughout. A while back, Diamondback posted a few pictures of their new creation. It immediately caught my attention because it profiled uniquely differently than anything out there. Once I got the DBX 5.7 in my hands, I was shocked at how small and light it actually was. No picture available could possibly grasp how minuscule it actually is. Diamondback truly created a dynamic firearm in an increasingly popular 5.7x28mm round.

When Ruger announced their new Ruger 57, the 5.7x28mm round gained much needed attention. Shooters began to “re-discover” the high velocity and low recoil ammunition that serves several purposes. From small game hunting to range plinking to self defense, the bottle-necked 5.7x28mm round suits the bill. It is also small enough for high capacity. The Diamondback magazines (FN Five SeveN compatible) hold 20 rounds. This dynamic round was available in only a few current production firearms. Flash forward to Nov 2020, Diamondback Firearms jumped on board and created the DBX 5.7 and shooter’s heads are turning.

Ok, what about the features?

The Diamondback DBX 5.7 is built tough with a hard coat anodized aluminum upper and lower receivers. The upper handguard is M-LOK compatible. It uses an “AR” style Magpul grip, thumb safety selector and a  mil-spec trigger. This provides a comfortable platform for rifle shooters who are familiar with those parts and controls. The stainless steel barrel is eight inches long coupled with a Diamondback muzzle flash hider. The 1913 rail extends through the top of the upper receiver. The DBX 5.7 does not come with optics however there is enough rail space to add any optic and/or magnifier you choose.

The back of the firearm has a 1913 rail to attach an arm brace. I installed an SD Tactical FS1913 folding brace that fits perfectly. Directly above the rear rail is a QD (quick detach) mount. A single point sling attached to the rear of the firearm would be ideal. The DBX 5.7 uses an ambidextrous side charger. Simply pulling the charging handle out, it can be reversed to the opposite side in less than 10 seconds. The charger is reciprocating but it is positioned away from the handguard to prevent any obstruction. The DBX 5.7 uses a dual gas piston operating system that is adjustable. If the shooter decides to use a can with suppressed ammo the gas pressure can be adjusted.

How light is it?

The DBX 5.7 weighs just three pounds unloaded. Add an optic and 20 rounds of 5.7x28mm, it still weighs under four pounds. The overall length is 15.25 inches. What I found most impressive was how thin it was. It measured just over an inch thick. Compared to other firearms in a similar class, the Diamondback DBX 5.7 is the smallest and lightest firearm I have experienced. As for my choice of red dot optic, I decided to keep it small and light to be consistent with the DBX. A little Burris FastFire II is what I chose and together the optic/firearm complimented each other.

Did you shoot it?

The Diamondback DBX 5.7 performed excellent at the range. I used standard Federal 40 grain 5.7x28mm rounds and the DBX 5.7 spit them out with ease. Once the Burris FastFire II was sighted in, the DBX 5.7 responded with extreme accuracy. The stabilizing brace was great for precision shots although not entirely needed. Due to the light weight of the DBX 5.7, I was able to hold it with two hands, like a subcompact pistol, while striking the targets with ease. Backing up to 40 yards was no problem. The range space available was minimal. I have another range where I can back up to over 200 yards. I believe the DBX 5.7 will be just as accurate at longer distances. This is an impressive firearm that is a blast to shoot at the range.

The Diamondback DBX 5.7 has an MSRP of $1,125. Because it was just launched along with gaining much positive attention, I am seeing it for sale online close to the MSRP or even higher. We have to wait to see what the local gun stores price the DBX 5.7 at. I believe it will drop in price over time. Check out the attached videos and let us know your thoughts on the Diamondback DBX 5.7.