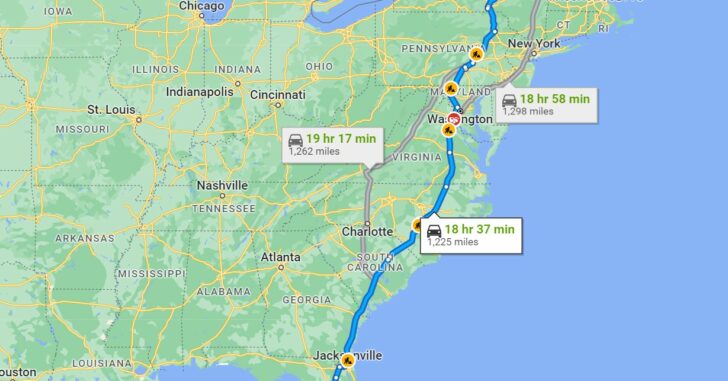 I recently made the drive from Florida to New York for an extended summer stay. Why New York, you ask? It’s not because of their great gun laws, but rather I’m originally from the area. This type of move presented challenges outside of the actual travel, including the decision as to which guns to bring with me, knowing that many wouldn’t pass the state’s ridiculous SAFE Act restrictions. More on that later.

The drive up was very gun friendly, including the ability to carry a concealed firearm, except for a stretch of the trip that lasted a little over an hour.

If you’re curious as to how I obtained the New York Non-Resident Permit, you’ll want to read this article.

With these two permits, my reciprocity looks like the map below:

Through my route, there’s a little red sliver that means no concealed carry, and that problem area is Maryland. It’s the only state on my route that has such restrictions, and it called for locking up guns and ammo out of reach of the driver’s seat. The typical location would be the trunk, but since I drive a Wrangler, Federal law allows other options. As long as everything is locked up, separately to be extra safe, and out of arms reach of the driver’s seat, you shouldn’t run into any issues if you were ever pulled over.

A hassle and absurd, I know.

Before I got to Maryland, I stopped and took my Hellcat off and removed the magazine and ammo. I put the gun in a hard-sided lock box and locked it up, placing it in the back of the Wrangler. For the ammo, I put it in a separate location and locked it up as well for good measure.

I’m not happy about any of it, but I play by the rules.

As soon as I was through Maryland, which I would never recommend stopping in a state where you’re transporting firearms and can’t possess them there, I stopped again and reverted back to the way things should be all over the Country.

From there on, it was smooth sailing.

Once I got to New York, I was reminded about why I left in the first place. Every single magazine I brought with me is a 10-or-less-rounder, because anything higher than that is dangerous (according to disgraced ex-governor Andrew Cuomo).

For anyone wondering, in New York State, you cannot be in possession of a handgun unless it’s on your NYS permit. Before I left, I had to file an amendment with the county that holds my permit in order to add all of my handguns that I was planning to take with me for the trip. This process took 5 months.

All legal and squared away, I can now enjoy the summer in the Adirondacks.

While my killer high-capacity magazines wait for me in Florida, as well as my more-deadly guns, I will soon be able to possess any semi-automatic gun under the sun in New York. If you’re curious about that, stay tuned.

Previous article: Woman Shoots 17-Year-Old Girl In The Face During Road-Rage Incident, All While Her 3 Kids Were With Her Next article: Armed Robbery and Carjacking Turns Deadly for Suspect