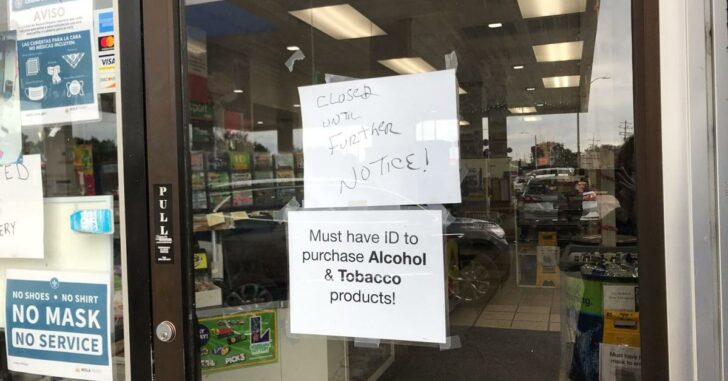 NEW ORLEANS, LOUSIANA – A gunman who fired at an employee during an armed robbery was fatally shot by another employee who first gave him a chance to surrender peacefully. It happened at the Big E-Z Fuel Stop in the 6500 block of Morrison Road just before 9:30 p.m. Thursday.

According to police, a man entered the store and got a drink from a cooler before going behind the counter, producing a gun and demanding money from the cashier. Store owner Nick Hingel, who was not present, commented after reviewing the surveillance camera footage, “She must not have been moving fast enough because he just started shooting, ‘Boom. Boom. Boom. Boom.”

Another employee heard the gunshots and armed himself, then pushed the cashier to the ground and out of the line of fire. “He told the robber, ‘Drop to the floor and put your gun down’, Hingel said. Rather than complying, the robber fired several more rounds in the direction of the employees. The armed employee returned fire and hit the suspect, who was pronounced dead at the scene, police said.

The deceased has not yet been publicly identified by the Orleans Parrish Coroner’s Office as of Wednesday afternoon.  The NOPD is treating the incident as a justifiable homicide. The employees were not hurt, but were understandably shaken, according to Hingel who commented, “This has been very traumatic for them.”

The crook obviously had the advantage over the unarmed clerk, but when an armed employee took decisive action and leveled the playing field, his odds for success changed drastically. Apparently not only was he a bad marksman, but also a bad gambler as he opted out of the opportunity to surrender and ended up losing it all.  Thanks to the quick thinking of the employee, both he and his co-worker were able to see another Christmas.

Previous article: BREAKING: Mass Shooting At IL Bowling Alley Leaves At Least 3 Dead, 3 Injured, "Person Of Interest" In Custody Next article: Woman Fatally Shoots Boyfriend with His Gun in Self-Defense After He Assaults and Threatens to Kill Her