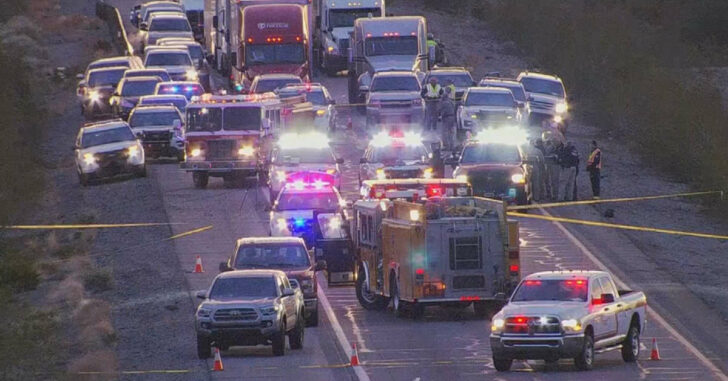 PHOENIX, ARIZONA — An attack against an Arizona DPS trooper occurred on the I-10 outside of Phoenix after a trooper stopped to assist a woman who had been ejected from her truck following a roll-over. He was responding to a call related to a motorist shooting at vehicles. As he set out flares, his attacker got out of his vehicle and shot the trooper in the shoulder.

A physical altercation took place and it appears the wounded trooper was receiving the worst of it until a passing motorist stopped to help. The motorist got out his gun and ordered the assailant to stop. When the assailant didn’t respond, he was shot and subsequently died at the scene.

Another passing motorist stopped and got on the DPS radio to inform them that there was an officer wounded. He also gave a brief description of what had happened and where they incident had took place.

“The suspect is getting the better of the trooper and is on top of him and striking the trooper’s head on the pavement,” he explained.

At that point, an “uninvolved third party” who was driving with his wife to California saw the trooper grappling with the suspect and stopped to help.

The trooper was air-lifted to a nearby hospital where he remains there for treatment. He is believed to be in stable condition. We pray for his fast recovery.

Colonel Frank Millstead of the Arizona Department of Public Safety personally thanked the two Good Samaritans that stopped to help his fallen, wounded trooper. He credits their actions with potentially saving that man’s life.

The assailant has not been identified at this time.

Words can’t express the tragedy and human compassion displayed together in this event. As horrible and vile as it is to ambush a lone police officer trying to aid an injured motorist, it’s truly a great thing we live in a country where there are people like the Good Samaritans in this story who will stop what they’re doing and help.

Right now, it looks like the trooper will pull through and make a recovery. It will take a lot of time, no doubt. Department of Public Safety goes out on the highways every single day, responding to the needs of its citizens and visitors alike. They put themselves at great risk and it looks like one bad guy wanted to take advantage of that.

If we don’t protect each other as well as ourselves, this society ain’t got a chance. It comes down to those who put on the badge and the uniform to go out into harm’s way but it’s just as important for law-abiding gun owners to be willing to help in dire circumstances.

Today, we’re happy to say that two citizens did that. And through their combined actions, a DPS trooper is alive.

Previous article: [CCW IN ACTION] Philly Concealed Carrier Almost Victim Of Carjacking... Until He Fights Back Next article: Guns With External Safeties: Are They Necessary For Concealed Carry?