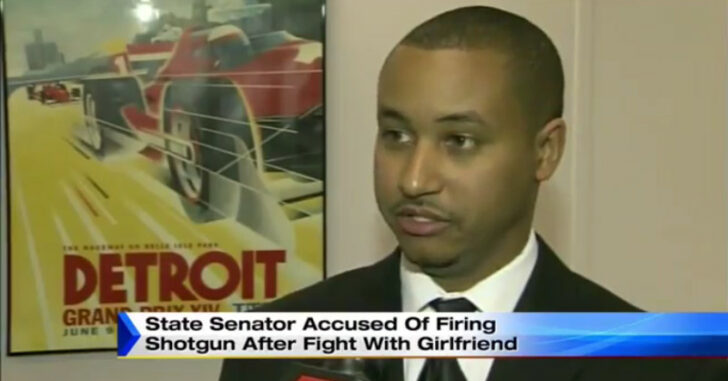 DETROIT, MICHIGAN — Safely falling into the category of “can’t make this crap up”, State Sen. Virgil Smith was arrested for allegedly shooting at his wife’s Mercedes-Benz while naked.  If you don’t remember Sen. Smith, you may once you see his track record of opposing concealed carry for citizens of Michigan.  He was in favor of slowing down the concealed carry application process and has opposed measures to expand where Michigan residents can and cannot carry.

I mean, why would he want someone to be able to return fire?  That makes it hard for criminals like himself to enact violence against others — including his own wife.

“(The ex-wife) went into (Smith’s) bedroom and observed a female … in (Smith’s) bed. (Smith) stated that (the ex-wife) attempted to attack (the girlfriend),” the police report obtained by The News said. “(Smith) grabbed (his ex-wife), they fell backwards, knocking over the television. (Smith) stated that (his ex-wife) attempted to attack (his girlfriend) again.”

Prosecutors may end up using a different measure of law to bring up potential charges against this state senator.  They tend to take it easier on elected politicians for some reason.  I don’t know why.  He clearly violated the trust of his own wife, used a deadly firearm, and obviously has no respect for anyone that elected him into office.  This is his cush gig.  Roll around in expensive cars and be a little kingpin in a rusted, hollowed out area of the state.

I don’t want to get too personal on this.  I know that if it was a concealed carrier or a regular citizen acting in a similar manner, that person would be tried as a criminal and lose his right to carry.  But, let’s not get hasty and say this man is going to get extremely significant preferential treatment.  Michigan politicians, after all, have a fantastic record of being the voice of the people, right?

His wife, of course, is offering a different story altogether — describing her discovery of her husband with another woman in their bed and then being repeatedly punched in the face before attempting to flee.

“At some point during the argument (Smith) grabbed her by the back of her head and shoved her face first into the carpet. Victim stood up and was struck by (Smith) 4-5 (times) in the face with closed fist causing cheeks on both sides of her face to swell.”

Smith’s ex-wife told police she ran out the front door, and he chased her with “an (unknown) type long gun and followed behind. She observed muzzle flash (three times) as suspect began firing at her,” the report said.

She managed to flee to a nearby friend’s house where she could treat her wounds and contact police.  When the friend attempted to recover the vehicle, it was apparently incapacitated due to excessive gunfire.

Senator Virgil Smith describes the entire situation as “the most stupid thing in my life.”

We, as responsible and law-abiding concealed carriers, could not agree more.  I, for one, hope that the people of Wayne County and the surrounding area, have better luck next time electing their next state senator.