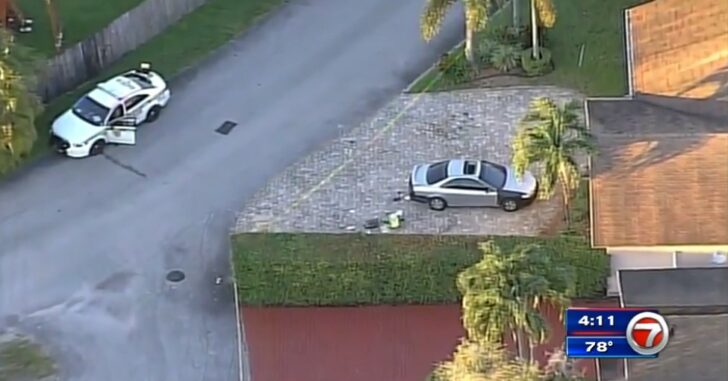 WEST MIAMI-DADE, FLORIDA — A man who was allegedly attempting to break into a home occupied by a 13-year-old boy was fatally shot by the boy’s father, a police officer with the City of Miami. The incident occurred in the 700 block of Southwest 98th Court in West Miami-Dade around 4 p.m. Monday.

According to Christina Carmenate, a relative at the scene, her cousin owns the home. “Somebody was trying to break into her house. She called her ex-husband that is a police officer, and there was some type of altercation, and there was a shooting. It was a robbery. It was an attempted robbery, and the bad person was the one hit.”

The suspect was transported to Kendall Regional Medical Center by paramedics and pronounced dead. He is identified at Anthony Arias, 29.

Detective Kristopher Welch of the Miami-Dade Police provided the following information, “The 13-year-old child contacted his parents and stated that someone was trying to break in from the rear. His father is a City of Miami Police officer, responded on scene, confronted the suspect, shots were fired. He ultimately succumbed to his injuries.”

City of Miami Police confirmed that the officer is a veteran member of their department, and they had a representative on the scene of the incident, which is outside of their jurisdiction. The incident is being investigated by the Florida Department of Law Enforcement.

Previous article: WHY WE CARRY: Woman Shot And Killed In Front Of Her Two Children By Ex-Boyfriend In Public Next article: Robber, Who Just Killed Victim, Is Immediately Shot And Killed Himself By Armed Witness