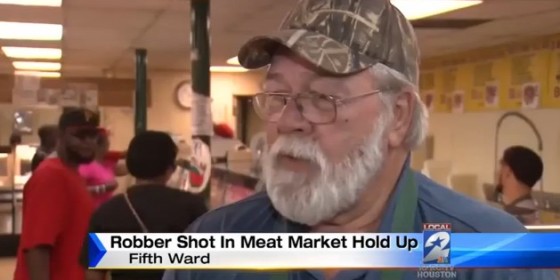 A suspected robber is on the loose even after a gunshot wound to the back of his head. Burt’s Meat Market in Houston is always a busy place, packed with customers and workers. J.L. Nickel has been managing the store for the past 23 years. He always keeps a gun in the shop, but due to the steady stream of customers coming in and out of the store each day, he figured their chances of being robbed were very slim.

Last week was the first time he ever used the gun. An armed robber approached the teenage clerk at the counter demanding money. Thankfully Nickel was in his office directly across from the checkout counter. He heard commotion coming from the store, looked out the window, and saw a hand holding a pistol.

This is when Nickel jumped to action. He grabbed the gun kept in the store and fired two shots at the robber, one hitting the back of his head. Despite the gunshot wound, the suspected robber took off running and is still at large. In response to his actions, Nickel said,

“Just spur of the moment. I just did what I had to do. Everything happened and I just did it on instinct. I was just worried about everyone else in here.”

This incident was the first time the store has ever been robbed in the 60 years it has been open. Despite the fact that Nickel hasn’t had to use the gun in such a situation, his quick response prevented what could have been a much larger disaster.

Previous article: Woman Receives 8-Year Prison Sentence for Supplying Guns to Man Who Used Them for Murder Next article: Increased Arrests for Seniors with Guns at Airport