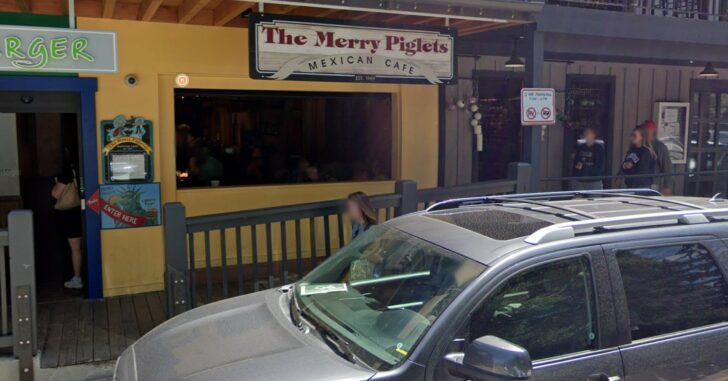 Nina Celie Angelo and her boyfriend, Matthew England, couldn’t believe it when they saw photos of a couple all over the news. They recalled seeing the couple at a restaurant on August 27th, because there had been an argument between Brian Laundrie and the restaurant staff.

It was around 1 or 2 p.m. on the 27th at Merry Piglets Mexican Cafe in Jackson Hole. Angelo told Fox News that Laundrie was arguing with wait staff, seemingly over a bill. She said that his body language was ‘aggressive’, and that he left and came back multiple times.

At one point, Angelo says that Gabby Petito, Laundrie’s girlfriend, came and apologized to the staff for his behavior.

Four and a half hours later, a travel-blogging couple passed Petito’s van at a campsite north of town.

After seeing some of the body cam footage released by police that show Petito and Laundrie being pulled over after police were called for a possible domestic dispute, the couple was recognized instantly.

“He goes, ‘Nina, that was the couple fighting at the restaurant,’” Angelo said. “And it stopped me in my tracks. I felt like the blood left my body. I was like, ‘Oh my God, I completely forgot about that incident.’”

Petito and Laundrie were on a cross-country trip, documenting everything along the way on social media. On September 1st, Laundrie arrived back at his home in Florida with Petito’s van, but arrived alone. It would later be discovered that Petito’s body had been found by police and FBI at a camp site back west, and Laundrie winds up missing. Police are still searching for him extensively.

Laundrie and his family have refused to speak with police regarding the disappearance of Petito since the beginning.

There seem to, now, be numerous accounts of possible domestic issues between the couple, and Laundrie’s apparent problems with his temper.

During the traffic stop, an officer even confronted Petito about the ‘toxic’ relationship and gave some guidance to the 22-year-old.

While we don’t know what actually happened to Petito, yet, things from the beginning have pointed to Laundrie being responsible. While it’s speculation until evidence is brought to light, you can’t help but wonder why Laundrie is currently on the run.

Domestic violence is a very real issue, affecting millions of people just in this country alone. If you are a victim of domestic violence, or know someone who is or may be, there is help.

Previous article: Juvenile Claims Self-Defense After Shooting Man With Bow & Arrow While On His Way To Tree Stand To Hunt Next article: U.S. Murder Rates Rose Almost 30% In 2020, Continues Into 2021