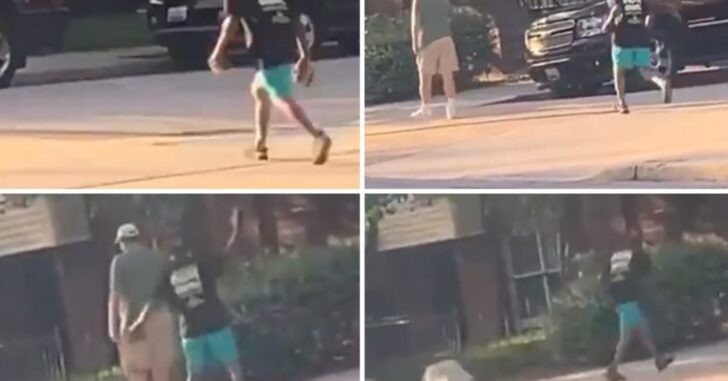 BALTIMORE, MARYLAND — As we watch the country fall apart, and people become more and more divided, we see things like this popping up all over social media.

For many, there is no respect for life. If you don’t agree with them, or if those involved don’t see eye to eye, your life is meaningless to them.

A witness, who refused to give their name or address, told police that the incident stemmed from a “loud argument” between two men, according to the report. One man began to walk away and then the other man picked up two bricks and struck him in the back of the head, the witness said, and then ran away traveling northbound by foot towards the Sharp Leadenhall apartments, according to the incident report.

Video of the incident has circulated like a wild fire, and shows the assault but not what led up to it. That video is seen below, clearly showing the suspect sneaking up on his target.

We’re not sure what happened prior to this, but sneaking up on someone who is walking away, and hitting them in the head with a brick is pretty low. And yes, it’s a lawful use of lethal force incident for the victim, or possibly a witness.

Bad people are out there, and it makes more sense than ever to avoid them –and confrontation– whenever we can. Getting into an argument with someone is usually never going to lead to anything productive, especially now with the state of our country.

Stay away from problems and confrontation, keep yourself safe, and be prepared to defend yourself if the need arises.

Previous article: 36 Gangs Vow To "Shoot On-Sight Any Cop That Has A Weapon Drawn On Any Subject In Public" Next article: Intruder Shot Dead By Accomplice After Being Confronted By Armed Residents During Home Invasion