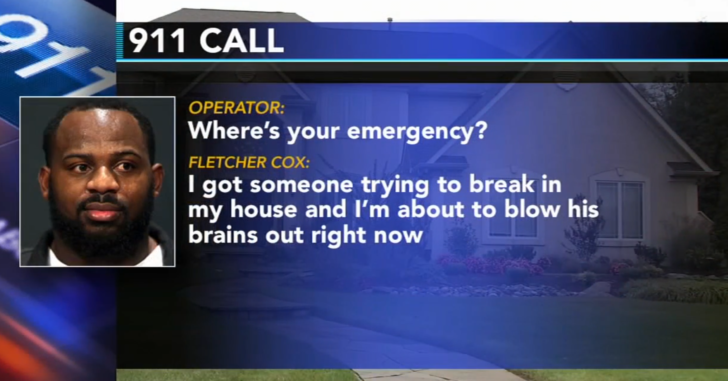 GLOUCESTER COUNTY, NEW JERSEY — Star Defensive Tackle for the Philadelphia Eagles, Fletcher Cox, was in the news recently for his actions off the field. He recently experienced someone trying to force their way into his home, smashing windows and damaging his car.

As the altercation unfolded, Cox grabbed a shotgun he keeps in his home and was about to take matters into his own hands.

According to court records, Nyemah of Marcus Hook, Delaware County, allegedly damaged Cox’s vehicle before attempting to forcibly enter the home by throwing rocks through the front door.

Court records also reveal surveillance cameras at Cox’s home capturing Nyemah walking around the exterior of the property with a baseball bat and attempting to enter the garage multiple times.

After Cox armed himself with a shotgun, he called police reporting a man attempting to break into his home. Nyemah then fled in his Porsche SUV.

It’s not often you hear that the guy trying to break into someone’s home is driving a Porsche SUV, but usually these stories don’t involve NFL players. The police later captured the bad guy (and his Porsche) who attempted the ruckus at Cox’s home. It was determined that the guy was the jealous boyfriend of a woman staying at Cox’s house and it was his attempt to confront his ex.

Cox had other plans should this guy have gotten any closer to actually getting into the house. He waited, shotgun in hand, ready for whatever was about to happen next. During a released 911 call he told the operator he was about to kill the guy.

Fortunately, when the ex-lover became aware that Cox had a shotgun, he fled before any shots were fired. What is great about this story is that it shows no one is invulnerable these types of things happening.  We imagine that super wealthy NFL players live in the types of neighborhoods, secured homes and have such lives that they wouldn’t need to worry about some nut trying to break into their house. Yet here it is.

Cox, despite his status did not rely on someone else to save him. He was prepared and ready to defend his home and his house guests if it came down to it. Organizations like the NFL may often side with ant-gun causes but it doesn’t mean all its players agree with that stance. This one NFL player is most certainly pro-gun, and probably more pro-gun now that he almost had to use it.