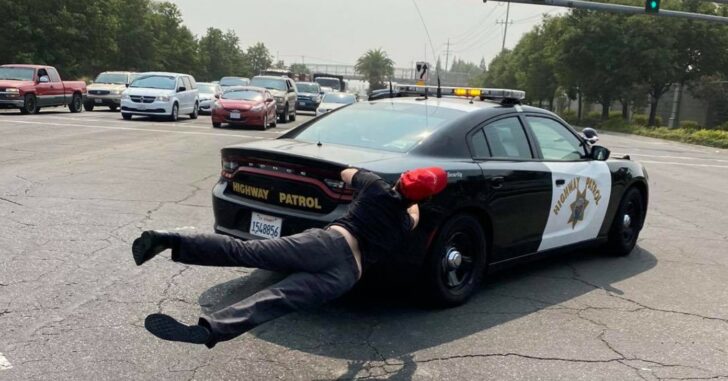 Peaceful protests are great, and should be a way for people to voice their opinions and frustrations at things that they believe to be unjust.

But if you start doing things like jumping on the hood of a police car, you’re absolutely asking for trouble, and have it coming as well.

A not-so-brite protester thought it’d be a good idea to jump on the hood of a police car in California during a protest in the street. If that were my vehicle, I’d see that as an immediate threat. Does that person have a gun? Are they going to break my windshield? If they do, can I still get away or am I going to have the entire crowd after me?

Thinking before acting is obviously not one of this person’s strengths.

I get that people are trying to make a point, in this case it was an anti-Trump rally. But some protesters are under the impression, based on the chaos that’s been plaguing the Country, that they can do whatever they want without consequences.

And that simply isn’t the case.

Our camera was rolling when anti- Trump protestors surrounded a CHP patrol car. One person climbed on the hood and the officer drove forward. Two people were injured…one was taken to hospital. The crowd had gathered to protest the President as he visited Sacramento pic.twitter.com/5iZFjXGglz

Previous article: Man Moves Quick To Get First Shot On Armed Robber Who Has Gun Pointed At His Face Next article: Riots And Looting In Lancaster, PA After Police Shoot Man Running After Them With Large Knife