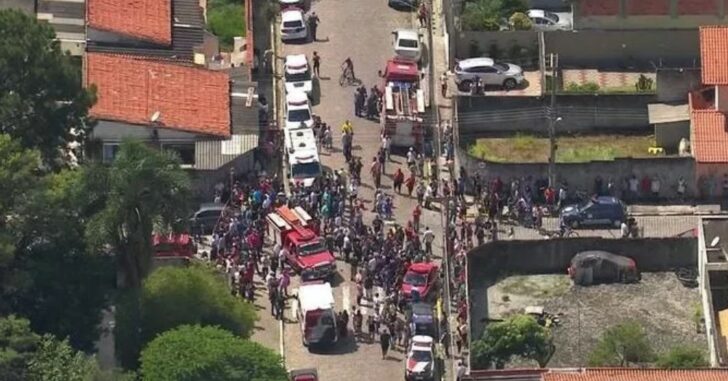 SAO PAULO, BRAZIL — Six students and two faculty members were killed yesterday at a school in Brazil, and then the two attackers killed themselves when they realized that police were moving in.

The uncle of one of the attackers was also killed a few blocks away from the school, prior to the pair arriving at the school.

Armed with a revolver, a crossbow, Molotov cocktails and an assortment of knives, the two ex-students wreaked havoc on the unsuspecting students.

The twisted pair killed six teenagers – four boys and two girls – while the school’s principal and another staff member were also among those murdered.

After the massacre, the gunmen killed each other in a warped death pact at the school in the Suzano area of Sao Paulo.

Chilling footage shows Monteiro entering the building where a group of schoolkids are congregating along with at least one teacher.

It took police 8 minutes to arrive at the school, by which time the two attackers had already taken their lives, and the lives of 8 others.

School shootings in Brazil are rare, but gun crime is not. I am not sure if schools in the country employ armed guards or the like, but it would seem that this location did not have anything of the sort.

Student Rosni Marcelo Grotliwed, 15, told news outlet G1 the attack occurred during the morning break and that one of the suspects had a gun and the other a knife.

He said: “We were in the cafeteria eating normally then we heard three pops. We knew instantly what that meant and we all tried to run to jump the wall of the dining area.

“The guys came after us and started killing a lot of people. When he ran out of bullets we had time to run.”

According to the witness, one of the sick murderers attacked him with a knife but the brave student managed to escape.

He said: “My friend took a stab in the shoulder and another was shot. I ran away with a friend to my house and came back to get a friend.”

The incident has a striking resemblance to the mass school shooting at Columbine High School in the US in 1999.

Video footage shows the first suspect walk into the building, turn around away from a group of students to pull the revolver from his pants, and then turns back around to open fire.

After this initial attack, his accomplice walks into the same building with a crossbow and other weapons, and starts brutally attacking those who were already shot and wounded or dead on the floor.

Later on, a large group of kids try to run out the door to safety. Some, along the way, try to fight with one of the attackers.

Our thoughts are with Brazil, and we hope that the Country does not experience anything like this again.

We will have more on this story as details are released.

Previous article: New Bill That Would Require Law Enforcement To Call Supervisor Before Drawing Firearm Is Not Actually A Thing Next article: BREAKING: City In New Zealand Shut Down After Mass Shootings At Different Locations, Many Casualties Suspected