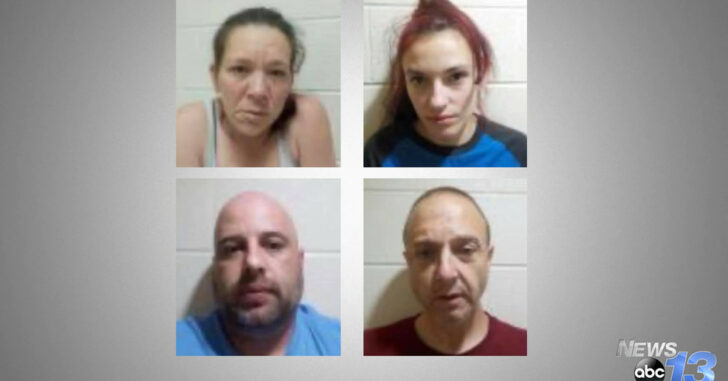 MACON COUNTY, NORTH CAROLINA — What do you do if four heroin addicts show up at your house and try to break in looking for money? Well, if you’re armed, you defend yourself against these crazies and send them running. That’s just what this one homeowner did in North Carolina.

The man told investigators a woman knocked on his door and when he answered a man tried to force his way inside.

The homeowner shot the male intruder in the arm and the suspects escaped in a car.

They admitted to law enforcement they were trying to rob the man for money to buy heroin.

The homeowner heard a knock at his door, and we can assume he answered it while armed. Upon answering the door a male figure tried to force his way inside. At this point the armed homeowner didn’t hesitate and opened fire on the intruder. The homeowner struck the man the arm. The other three heroin heroes went running for their lives and escaped in a car.

The trio of runaway junkies were later found and arrested.

We always preach that carrying while at home is a necessity. Many people don’t like to even think of the idea of relaxing down on the couch while still carrying their firearm. Sure, it can be inconvient, but it very well could save your life.

The homeowner in this story was armed when he answered the door and it very likely saved his life. These were four strung out junkies looking for money to get their next fix. They are capable of anything. Had the homeowner not had his gun, its likely that the four intruders would have overpowered him with relative ease.

It’s also important to point out that the homeowner acted without hesitation. The moment he saw the threat he used his firearm to defend himself. A firearm is only useful if you are willing to use it. Had the homeowner hesitated to draw his weapon and defend himself, again, he could have been overrun by the four intruders looking to score some cash.

The armed homeowner did everything as he should, including not trying to pursue those running off. In the end he was not harmed, he lost no money or property, and four dangerous people were arrested and taken off the street.

Previous article: The Springfield XD-M Elite Is In Our Safe, And It's A Masterpiece Next article: 110 Of The Best Selling Guns During The Pandemic And Riot Times Of This Country