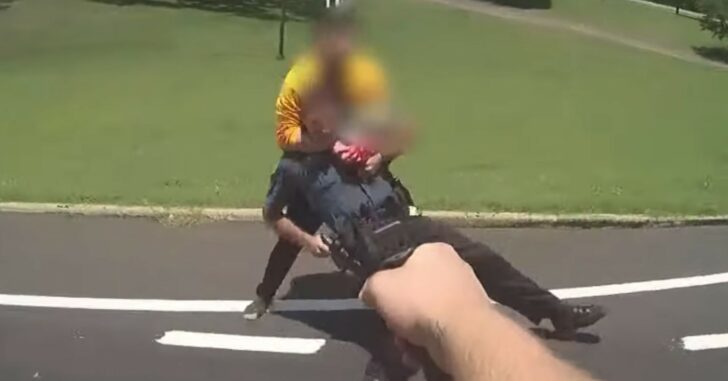 An incredible body-cam video has surfaced that shows two officers responding to a call of a man with a knife. That man does not listen to any of the officers’ commands, and both officers retreat with guns drawn while trying to reason with him.

Here are the details:

ATHENS, GA – On Monday, July 1, 2019, at approximately 12:45 PM, the Georgia Bureau of Investigation was requested by the Athens Clarke County Police Department (ACCPD) to investigate an officer involved shooting.

Preliminary information indicates that 2 ACCPD officers responded to a scene after receiving a 911 call about a male, later identified as Aaron Hong, age 23, causing a disturbance with a butcher knife at the River Club Apartments on Macon Highway, Athens, GA. Hong was using the knife in an aggressive manner and appeared to be injured himself. When police made contact, Hong immediately confronted them and began to walk towards officers with the knife in hand. During the incident, officers provided numerous verbal commands for Hong to drop the knife. Instead, Hong charged one of the officers with the knife and the officer fired his weapon multiple times, striking Hong. Hong managed to get back up and during the confrontation attempted to grab one of the officer’s weapons. The second officer fired at Hong multiple times, striking him. Nearby medics responded and Hong died at the scene.

Redactions in this video were made by ACCPD and not LEN

These officers clearly did not want to shoot Hong, and did everything possible to avoid pulling the trigger.

However, when Hong took the opportunity to lunge at one of the officers, deadly force was necessary.

This is a reminder not only to armed citizens and police officers, but to everyone; A threat is still a threat, until it is no longer a threat.

The initial shots were not enough to stop this particular threat, and the consequences could have been deadly for the officer who was attacked at the end of the video.

Had the first shots stopped Hong, that would have been the end of this incident. They would have been able to take control over the situation and take Hong into custody, and then to the hospital for treatment.

This was a force, however, that would take more to stop.

Remember; even with shots on target, make sure you’re staying focused and in the fight until you are absolutely sure that the threat has been successfully stopped.

Great job by both officers.

Previous article: 60 Minutes Does 'Study', Finds That Bullets Can Cause Damage Next article: The Most Overlooked Concealed Carry Decision