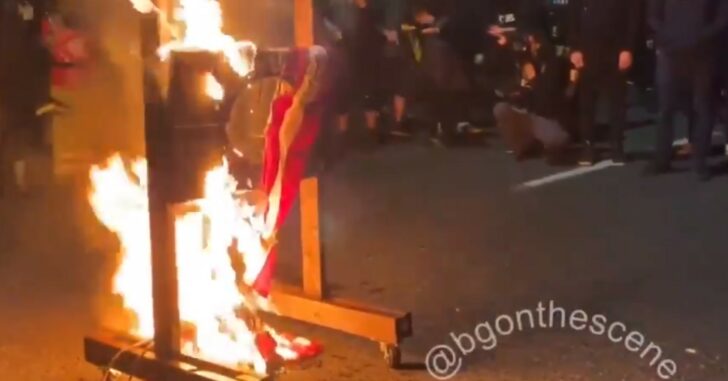 More violence and unrest came to Portland on Saturday night, with a group of over 200 protesters walking through the suburban streets. With them, they brought a Guillotine and some American Flags to burn, and then called on residents inside their homes to help them.

The protesters have brought out a guillotine to the streets #Portland #PortlandProtest pic.twitter.com/Swc8ryJV8Z

Protesters cheer as they burn American flags at the guillotine outside the police bureau #PortlandProtest #Portland pic.twitter.com/R9I6dobNiv

Their destination was the Penumbra Kelly Building, which houses public safety offices. Once they arrived, police made it very clear during an announcement that if they weren’t going to behave, the officers would be taking action.

Protesters wheel a guillotine into the street in front of the police bureau #PortlandProtest #Portland pic.twitter.com/Kj66263VcU

A woman with a bullhorn, while standing in front of some residential homes, made some demands after

The woman yelled into a bullhorn: “What are you doing to protect your neighbors, people in their houses?”

“Get in the f***ing streets,” another man screamed.

“There are safety in numbers,” the woman continued. “We protect you every night by being out here. Please come and protect us. Make sure you are offering us refuge. We are tired and yet we are still out here. We are simply asking for one night, one hour.”

Protesters call on people to let them into their houses and give them refuge as the movement progresses #Portland #PortlandProtest pic.twitter.com/tZZDVGUfov

It’s a little interesting to think that this crowd believes that everyone is going to come out of their homes to join them, and that they’re all on the same page.

If I were in one of those homes, I’d be watching from my window with a plan of action if someone decided to try anything at my home.

Once they got to their destination, that’s when the real trouble began. The crowd became violent, throwing items and injuring numerous officers.

“Many participants in the march carried hardened shields, helmets, armor, gas masks, and wore all black clothing,” the Portland Police Department said in a statement. “At least one participant targeted the Portland Police Air Support Unit airplane with a green laser. This is extremely dangerous and could cause disorientation for the pilot, in addition to permanent eye damage.”

Previous article: Why We Carry: Guy Slashed With Knife, Apparently Because Of A Mask [Graphic Warning] Next article: Man Charged With Murder After His Brother Was Killed By An Armed Homeowner During Their Invasion Attempt