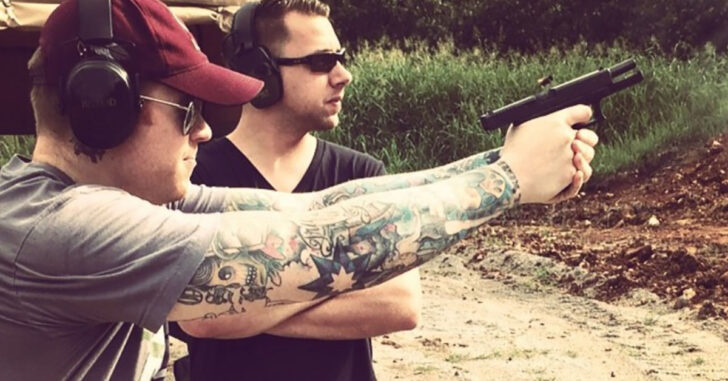 There’s a saying I heard years ago that has always stuck with me.  “The worst three firearms instructors are boyfriends, husbands, and fathers.” I began thinking about it and realizing how true it is.

Typically, its due to a lack of information because they aren’t as well versed as they think regarding shooting.  While they may be firearm owners, it doesn’t mean they understand technique.  More importantly, people we are closest to can often be the people who show frustration at an earlier rate.

Many of us can look back to thoughts of learning how to drive for the first time.  I remember getting out and just saying, “You do it!”  That saying of the worst three instructors is often true, but like all rules, there are exceptions.

Here’s how to be that exception.

1.) Be patient!  You’re going to have to repeat yourself a lot.  If you are frustrated, you’re going to make them frustrated.  More than likely, a newer shooter is already experiencing higher stress levels.  They don’t need you adding to it.

2.) Start with an unloaded firearm.  Again, back to the driving example. We learn what all those gadgets, levers, and pedals do before we hit the road.  Make sure you do the same with a firearm.  They can learn firearm manipulation, stance, and grip all before sending one round down range.  It gives them much more confidence once they are ready to move to live fire.

3.) Avoid large caliber firearms.  This can be an immediate turn off to new shooters.  Something we see a lot is where people think its funny to watch reactions of new shooters with large caliber firearms.  Don’t be this person.  We lose many people every year who will never give firearms another shot and have countless conversations about how scary it was, all because the person they “trusted” wanted to get a good laugh.  Instead, start them with a small caliber that’s easy to handle so they don’t focus so much on recoil and can instead focus on the basics of marksmanship.

4.) Focus on a couple things at a time.  There are so many actions to take in all at once that focusing on a couple simple ones will help them progress and not be overstimulated.  Once they seem to have those actions down, add one or two more.  Information overload is very common for newer shooters, so ease them into it.  If they began slipping on some of the actions, step back and focus on them some more.  This can include returning to an unloaded firearm to focus on the main aspects of grip, stance, sight alignment, and trigger press.

5.) Keep them breathing.  Slow, deep breaths.  This will keep them calmer in general, allowing a more focused, relaxed state of mind.

6.) Give compliments as progression is observed.  This helps them understand they are doing it right.  While they may feel a little lost, they may not realize they are getting better.  Be sure to boost their confidence which will keep them driving forward and have a calming effect.  This allows for a much more focused shooter.

7.) Listen to them.  Sometimes you may not understand an issue they are having but if you listen, they may clue you into something you can fix, and sometimes be the game changer you are trying to help them find.

8.) Break up the lessons into multiple range visits.  This gives them plenty of time for thought while taking small bites.

9.) Grab a meal or a coffee afterwards.  Have a nice, post-range sit down. I call it a Sip Rep.  Ask questions and again, listen!  Talking through it afterwards will help them to see what they need to focus on.  Again, compliment their strengths and keep the whole experience positive.  This will help keep their mind active on the material which will allow for a better return visit.

10.) Be patient!  Yes, we said this one already, but its the most important.  If you are taking someone shooting, the goal is for them to enjoy it and eventually make it one of their new hobbies.  So ease them through the process and recognize we all move at differing paces.  If you can’t be patient, its best to find help from someone else who can be.  The process is meant to be fun, so make it enjoyable and you’ll have many fun range visits and new friends to shoot with!

Following these simple steps can ensure a pleasant learning experience. With the importance of preserving the second amendment, it is vital that we don’t turn off potential supporters and those who are on the fence.
Do you have other suggestions for taking first timers to the range?  If so, we want to hear from you in the comments below!

Previous article: [VIDEO] 22-Year-Old Attempts Mass Shooting Today In Dallas. The Result Is Not What He Was After. Next article: Customer (also a felon), Upset With Work Done On His Car, Opens Fire Inside Shop, Shop Owner Stops Him With Shotgun