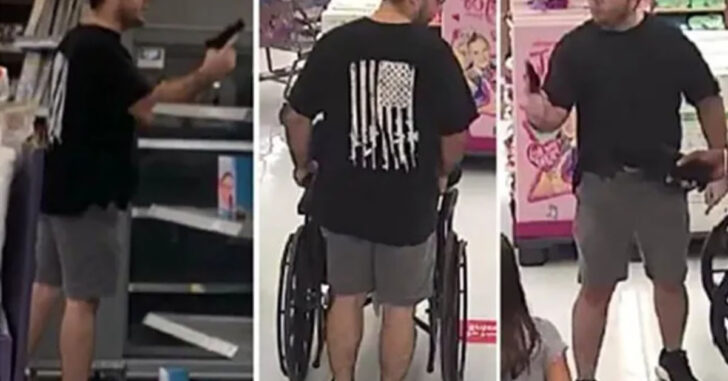 The non-mask wearing man is facing felony charges after he drew his firearm and pointed it at the mask-wearing man who told him he should be wearing a mask.

Vincent Scavetta, 28, was charged with aggravated assault with a firearm and improper exhibition of a firearm and arrested Wednesday after turning himself in, Palm Beach County Sheriff’s Office officials report.

While pushing his father in a wheelchair, Scavetta told police that it was pouring rain on the day of the incident and once arriving inside the Walmart store, he needed to remove the mask because it was soaking wet.

46-year-old Christopher Estrada was in the electronics department with his daughter, and came into contact with Scavetta. He told Scavetta that he should cover his face, and an argument ensued after Scavetta swore at him, according to reports.

Then, things get weird and ugly.

When Scavetta reached toward the waistband of his shorts, Estrada reportedly told him that he didn’t care about his gun — a moment captured in the viral video. Then Scavetta pulled out his gun, pointed it at Estrada and said, “I’ll kill you,” authorities said.

Onlookers broke the two up, and they went their separate ways. Scavetta and his father left the store, while Estrada called police.

Video and photos from the incident were spread across social media, with the police asking for the public’s help in identifying the man who pulled the gun, who we now know as Scavetta.

Let’s be perfectly clear about something: This incident, in no way, warranted the drawing of a firearm.

Scavetta has a long uphill battle, and rightfully so. The felony charges filed may not hold, and we’ll just have to wait and see how this pans out.

Previous article: Man Is Shot And Killed After Trying To Run Someone Over During Mask Dispute Next article: [GRAPHIC WARNING] Portland Man Walks Into Laundromat With Saw, Hacks At Two Women Inside