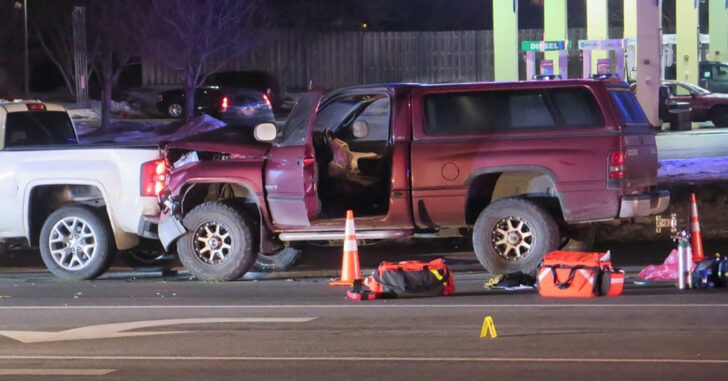 FRIDLEY, MN — Every time there’s a proposal to reduce restrictions on gun ownership and expand the right to carry a firearm, our friends in the Civilian Disarmament Industrial Complex trot out the same old tired talking points to argue why less regulation is a really bad idea.

Besides wrote predictions of Dodge City-like violence and blood running ankle-deep in the streets, the other oldie but goodie they fall back on is the claim that with more people regularly carrying concealed firearms, every routine parking space dispute and fender bender will inevitably devolve into a gunfight.

Somehow the fact that their dire predictions literally never come true doesn’t seem to stop them from making them the next time around. So pointing out that the use of a gun probably saved a life in the aftermath of an accident in a Twin Cities suburb yesterday probably won’t have much of an impact on them. Oh well.

Wednesday at 4:20 p.m., officers responded to a crash involving four vehicles at the intersection of Central Ave NE at Medtronic Parkway NE.

One of the drivers apparently became enraged and pulled a knife and went after one of the other people involved in the accident.

The events unfolded Wednesday afternoon along Highway 65 in the Minneapolis suburb of Fridley. Police say the man with the knife was involved in the crash and was trying to assault another driver. Another motorist who wasn’t involved in the accident stopped to intervene and shot the man several times before police arrived.

The man with the gun stayed at the scene and has been cooperative with police. Police are investigating if the man was legally carrying the gun.

We certainly hope so. Minnesota has some terrible vehicle carry laws that require a handgun in a car to be “unloaded, contained in a closed and fastened case, gunbox, or securely tied package.” Unless, that is, you have a concealed carry permit.