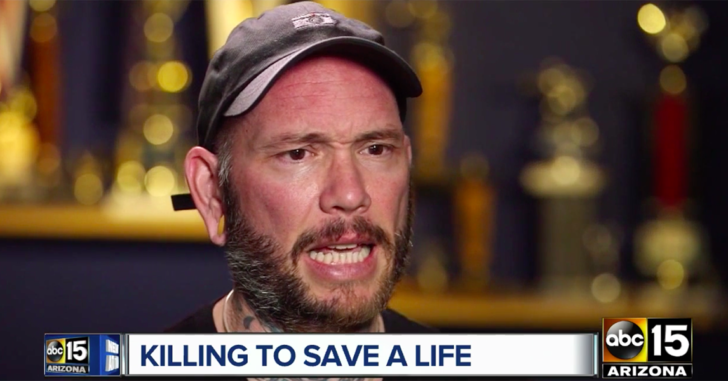 You may remember a story last year in which a concealed carrier — one who had had his gun rights restored after a felony conviction — came to the aid of an Arizona trooper who was being attacked by an illegal alien. Thomas Yoxall no doubt saved trooper Ed Andersson’s life by the side of the road that day as the attacker, Leonard Penuelas-Escobar, had already shot him once and was beating him when Yoxall arrived on the scene.

Andersson, a 28-year department veteran who underwent multiple surgeries for his injuries and hasn’t yet returned to work, was asked during a police interview what would have been the outcome if the driver hadn’t stopped the attack.

Now video has been release of Yoxall relaying his story to investigators in the aftermath of the shooting.

Yoxall’s emotional response while recounting the shooting to detectives is worth noting. Reading comments posted throughout the gunblogosphere, you’ll see plenty of keyboard commandos proclaim they’d have no problem using their concealed carry gun to shoot anyone who threatens them, their family or their property. And that they’d sleep like a baby in the aftermath.

As Yoxall’s reaction demonstrates, it’s not as easy to shoot another human being as many gun owners think. His defensive gun use was a clear a case of justified deadly force if ever there was  was one. Yet the effect of shooting and killing another person — no mater how clear cut the situation– is something every person who carries a firearm needs to consider when they strap theirs on every morning.