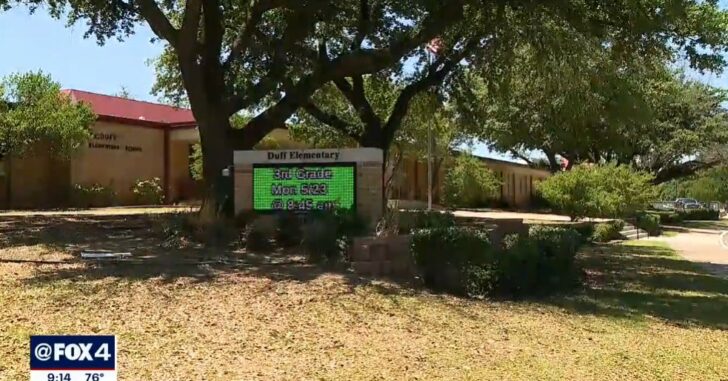 ARLINGTON, TEXAS – A concealed carrier suffered a gunshot wound to the leg after his concealed handgun was dropped and then discharged Thursday – in the lobby of Duff Elementary School in Arlington, Texas. With emotions still high and everyone one edge after the tragedy at Robb Elementary School on Tuesday, the incident understandably caused great anguish among students, parents, school officials and law enforcement officials.

Parents were notified via text messages that the school was placed on lockdown and many feared the worst.  Karima Rasheed said, “When I received the text message, I was like, ‘Oh my God, something is going to happen.’ I was shocked.”

While the school does hold regular lockdown drills, Rasheed’s son, Rami, said that this one was different. Barely 48 hours after Tuesday’s mass shooting that left 19 students and 2 teachers dead, children showed their raw emotions. “I started seeing my classmates starting to cry and our teacher got a notification on their phone saying someone was in the building,” he said.

Anthony White, 55, is a parent of a Duff student. According to a school district spokesperson, he was not near any students when the negligent discharge occurred in a lobby area outside of the classroom hallways. He was treated for a non-serious gunshot wound at a local hospital. Following his release, he was promptly arrested and charged with unlawful carrying of a weapon in prohibited places and discharge of a firearm in certain municipalities, according to Arlington Police Chief Al Jones.

Police and school officials stated that White did not have “malicious intent” and no threats, verbal or physical, were made. Thursday was a day with a planned early release and students were allowed to leave at the scheduled time of 12:10 p.m.

Thursday was also the graduation day for the 6th graders of Duff Elementary, and Rasheed recounted a conversation with her son as she drove him to school that morning. Speaking of the Uvalde incident and the possibility of an incident at Duff Elementary, she told him, “If something happened, you’ve got to run anywhere that’s safe and hide.”

Once again, this incident bears out that concealed carriers should obey laws regarding firearms on restricted premises. More importantly, it shows what can happen if a handgun is capable of discharging when dropped, and the critical need for a quality holster that is properly worn and allows a firearm to be carried safely and securely.

Previous article: We Are Taking A Few Days Off For The First Time In Years Next article: Stupid High School Students Force Lockdown After Shooting Other Students With Paintball Gun