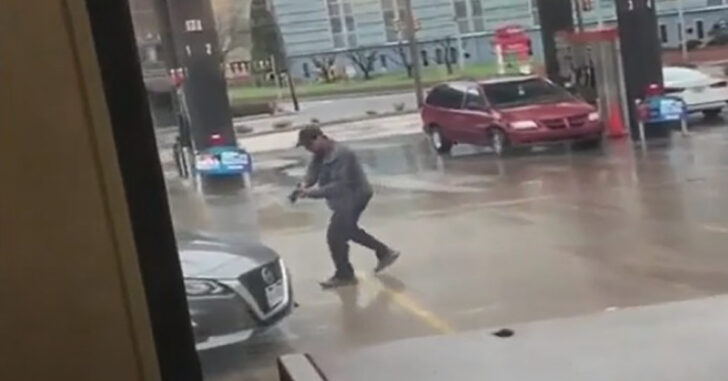 JOHNSTOWN, PENNSYLVANIA — A man who coughed and didn’t cover his mouth is what police say started an altercation that led to another man firing shots.

53-year-old William Sauro, the driver of the vehicle; and 56-year-old Guillermo Alvarez, the trigger happy man, are at the center of this story.

Police later interviewed Sauro, who told them he saw Alvarez walking through the Sheetz parking lot “coughing and not covering,” the complaint says.

Sauro says he told Alvarez to cover his mouth when he coughed because of the virus going around, according to the complaint.

Sauro said the comment led to an altercation with Alvarez, who eventually pulled out a pistol and fired a round into Sauro’s windshield that lodged in the speedometer, according to police.

Police say surveillance video shows Alvarez stop at the front door of the Sheetz and look back at Sauro in his vehicle before having an apparent conversation with him.

Alvarez is then seen walking over to confront Sauro, who got out of his vehicle, police say.

Police say Sauro then got back into his vehicle before hitting Alvarez with his vehicle.

That’s when police say Alvarez pulled out a gun and started shooting.

Alvarez didn’t have a concealed carry permit, and police say he was still holding the gun when they arrived on the scene.

Watch the video below

The altercation could have been calmed down by either party, but neither seemed to back down. It was only after Alvarez was hit by Sauro that he pulled out his firearm and began shooting, but Alvarez could have avoided the situation altogether. And both, certainly, could have done something to de-escalate.

Both were charged with aggravated assault and recklessly endangering another person.

While Alvarez wasn’t carrying his firearm legally, this is the exact opposite of how gun owners should behave. Whenever we can, we are to avoid confrontation at all costs. The only time we draw our firearms is if our life is in immediate danger. Alvarez had plenty of time to walk away, and furthermore, shouldn’t have continued on with his actions.

“I think the incident to a certain extent maybe as a result of the frustrations and anxiety people are feeling right now because of COVID-19,” Cambria County District Attorney Greg Neugebauer said. “I would urge people to have patience with each other as much a possible as people are on edge being around people right now.”

Previous article: Gun Battle Between Felons At Convenience Store Leave 5-Year-Old Girl Dead As She Sat In A Car With Her Sister Next article: Illinois Extends Expiring CCW Permits And FOID Cards Due To Virus Outbreak