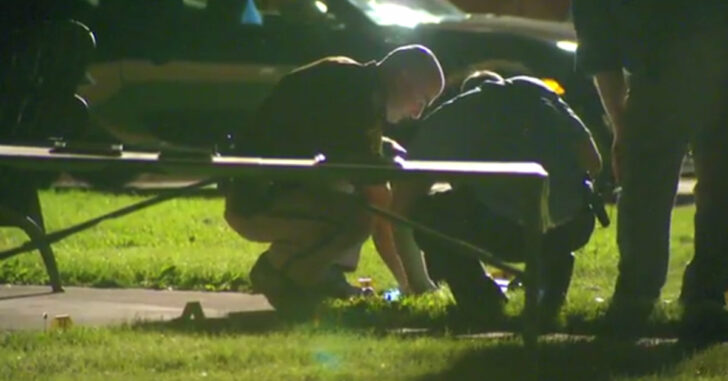 HENDRICKS COUNTY, INDIANA — A couple celebrating their anniversary on their porch were interrupted when the woman’s violent ex-husband showed up with a pair of nunchucks. The husband saw the man blatantly ignore the ‘No Trespassing’ sign as he approached wielding a weapon best left in the hands of pizza-loving Ninja Turtles. For the man who had a history of violence and a restraining order, the suspect just didn’t seem to want to leave well enough alone — so he got done well enough with a little help from the homeowner.

“I’m sitting here at the back patio. My wife is sitting here. My dog starts barking. I see his car pull up,” described the homeowner.

Anthony “Tony” Casada got out of his car with nunchucks in hand, which the homeowner took rightfully as a threat.

“My thoughts were, ‘he’s going to try and beat me up or kill me with these nunchucks then go take it out on my wife’,” said the gunowner.

Allegedly, Casada was angry about their daughter’s cell phone bill. In whatever way that matters at all, apparently nunchucks were the logical answer that sprung up in his mind.

The homeowner tried to dissuade him by brandishing a firearm when he trespassed onto the property.

“I told him he’s an idiot. I pointed my gun at him. He kept making progress toward me, swinging his nunchucks and that’s when I shot him,” Gregory said.

According to the homeowner’s wife, whom had been married to Casada nearly a decade ago, she had absolutely no doubt that he would have attacked her husband and gone on to assault her and her children.

Indiana authorities have not charged the homeowner and they believe that this was a clear-cut case of self-defense. For whatever reason, thinking that bringing nunchucks to assault a homeowner, his wife, and his own children seems like something so ludicrous that it leaves all other ideas of the suspect’s logic in question.

Casada was shot six times and is currently in the Intensive Care Unit of a local hospital. If he ever awakes from a coma, authorities will likely charge him with trespassing and a number of other crimes he committed.

Bad guy goes down, good guy saves family — that’s what it’s all about. Be responsible and carry even on your anniversary day, folks.

Previous article: Guns At Work: Should You Bring Yours? Next article: A Big Push For National Reciprocity Is Underway