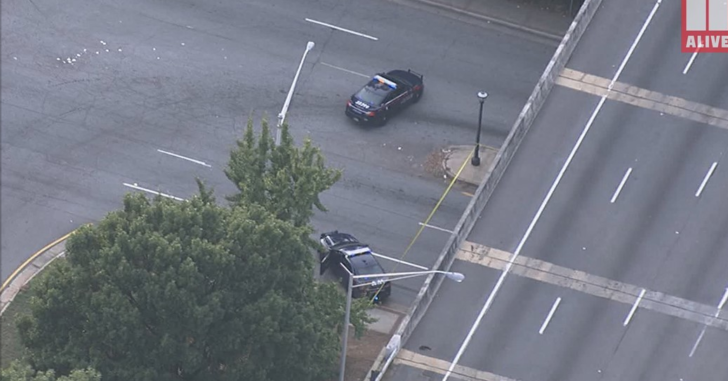 ATLANTA, GEORGIA — In the scope of David and Goliath stories, a pickup truck versus a moped fits right in there; and that is exactly what happened in Atlanta. An altercation on the road led to a pickup truck full of guys to get out of their car and beat a man on a moped. That’s when things got even crazier.

Police said the men in the truck got out of their vehicle and assaulted the person on the moped. He then pulled out a gun and fired a round, hitting on of them. Police said the man was taken to the hospital for medical treatment.

The person on the moped tried to leave the scene, but police said the group in the truck followed him. Police said the truck ended up hitting another vehicle in the process.

So let’s recap all the craziness that happened. First, there was some kind of road rage incident between the lone guy on the moped and a truck full of people. This led to a group assault from the guys in the truck on the one guy in the tiny moped.

In self defense, the guy in the moped pulls out his firearm and shoots one of the truck assailants who was beating on him. The moped driver, not wanting to stick around for what might come next, speeds off in his moped down the highway.

The truck, with a shot passenger, decides to go after the moped causing a dangerous high speed chase on the streets of Atlanta. Trying to keep up with the more mobile and agile moped, the truck eventually crashes into another car – causing additional injures to the passengers in the truck.

So what can we learn from this? First, don’t judge a person by what they are driving. Just because this guy was on a moped didn’t mean he wasn’t willing to defend himself with the lethal force of a firearm!

Second, try not to leave the scene of a crime if you are involved in a self defense shooting. Now of course, in some instances (such as this one potentially) fleeing to remove yourself from the danger and saving your life may be OK.

Being outnumbered, it is possible the moped driver fired the shot and took off to get away from a group of people trying to hurt him. If, however, the moped driver just fled the scene of the crime because he didn’t want to get in trouble; well the opposite is going to happen. It is going to look mighty suspicious and hurt his case.

Third, if you are in a group and one of you receives a gunshot wound, take that person to the hospital above all else! Don’t try to chase the shooter or get revenge. Fortunately no one died in this incident, but ignoring the potential fatality of a gunshot wound was a bad idea from the guys in the truck.

Fourth, remember to always carry! You never know when you’re going to be the David in Goliath’s story.

Previous article: Hornady® ELD-X Bullets For Hunting Next article: Synagogue Threatened With Bomb Attack, Rabbi's Response: "This Is NOT A Gun Free Zone"