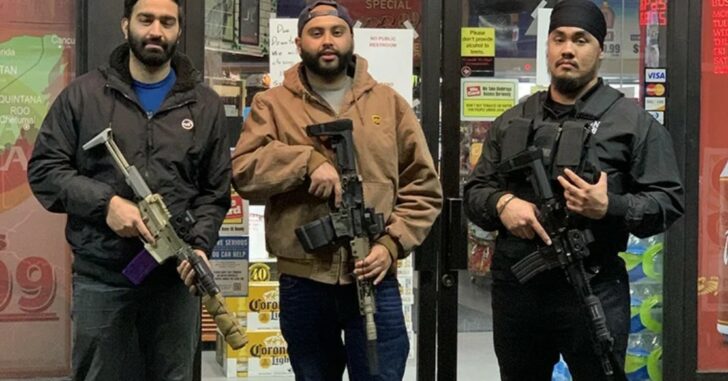 With all the incidents of anarchy and unrest of late, there’s a chance that someday you or your loved ones could find yourselves on the dangerous end of a mob’s anger. With that in mind and while you can think calmly and without haste, consider what the threshold would be for you to use deadly force if confronted by a hostile mob in your car, on your property, or in your home.

As has been seen time and time again, you cannot be cavalier in wielding deadly force in self-defense. Neither the local prosecutor nor the jury pool will likely come from a group of NRA Annual Convention goers full of vocal advocates for right to armed self-defense.

Far from it, especially in blue states. That goes double for the deepest blue states like Illinois, Maryland, New Jersey and so forth.

But even in solidly red states, there are jurisdictions where the local prosecutors side with criminals over law-abiding citizens every day (city of St. Louis, for example). You really need to consider this ahead of time.

You cannot use deadly force (either your gun or your vehicle itself) to stop people from damaging your car. And brandishing a firearm hoping it will “part the Red Sea” of angry protesters will likely get you a arrested and prosecuted by criminal-friendly prosecutors in larger cities. Don’t brandish unless you’re justified in using deadly force — in reasonable fear of death or grievous bodily harm — and willing to follow through if the bad guy persists. You’re not starring in a Miami Vice episode.

At home, consider a similar scenario, that of a hostile mob. No, it will probably never happen, but the McCloskey’s in St. Louis no doubt thought it would never happen to them, either. But it did.

They brandished their guns as a hostile mob tore down a gate and poured onto their private property (once again, they live in a private neighborhood where others must be invited in). The Soros-bought St. Louis Circuit Attorney, Kimberly Gardner, thought the McCloskey’s were criminally wrong for threatening the horde with guns.

Even with the McCloskeys’ restraint, the prosecutor had police seize their guns a few days later. Now they face felony charges from a criminal-coddling politicized prosecutor.

Sometimes you just can’t win against a hostile prosecutor. So be prepared for a jury trial.

As an aside, do you have self-defense insurance? Now would be a fine time to sign up for a policy!

At home or your business

What is your line in the sand at home or at your place of business? Is it someone throwing bricks through your windows? Is it someone lighting a Molotov cocktail outside? Is it a violent and tumultuous entry as they break down your door?

What if they set upon your car that’s parked in front of your house, but don’t threaten you inside your home? Laws around the use of deadly force to protect property differ widely from state to state. It’s important to know what’s legal when you live before it happens.

Think though it now, while you have time and can consider your options and the consequences. Know who to call: 911, even if only to get it on the record, and your attorney (keep their number programmed in your phone).

You need to consider these questions now, not when you’re in the middle of a confrontation you didn’t want, but are forced to deal with. One in which there is a flood of inputs, emotions and adrenaline to manage in addition to a dynamic events going on around you.