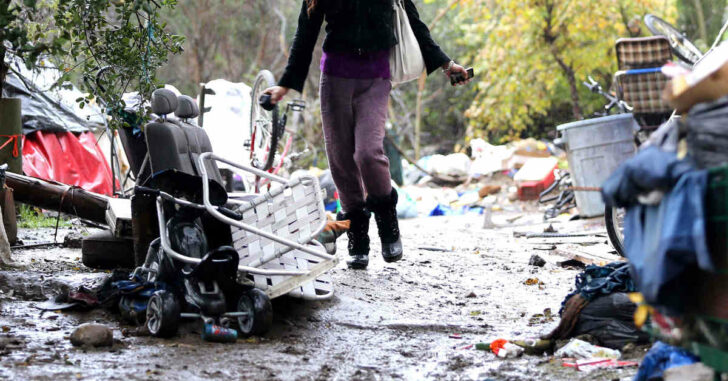 GAINESVILLE, FLORIDA — Amidst the rag-tag arraignment of tents, clotheslines, and make-shift living conditions, one Florida woman was able to defend herself from another man by use of a firearm. After a frantic 911 call to emergency services, the woman kept repeating “get off me” before disconnecting. By the time authorities arrived, 41-year-old Michael J. Wilson was found dead at the scene.

According to a statement given to the Hastings Tribune, the Gainesville Police Department is ruling that this shooting is a justifiable homicide by reason of self-defense.

For millions of Americans living on the fringes of society, the threat of violence is very real. In Florida, homeless camps have sprung up all along the state. These camps can sometimes spawn violent acts which make it even harder for many Americans to live peaceably.

Homeless villages have popped up especially frequently in places like Alachua County, where it’s estimated up to 1,300 homeless people live in semi-permanent camp settlements.

One such settlement is known as Dignity Village and it is home to some 200 homeless people who’ve set up in the area. It’s also been the site of some gruesome deaths as occasionally violence breaks out.

Homeless people come from all strata of social life. No real good statistics are kept by either Alachua County or in many other parts of Florida but police are obliged to respond to crimes as they are reported. For one woman living in a domestic abuse situation, a handgun may have just kept her from becoming just another lost soul in muck.

The right to bear arms is a right bestowed upon all American citizens — it’s good to see one woman was able to use it.