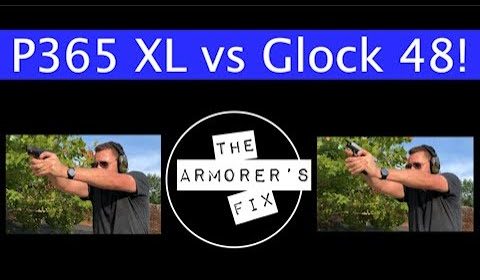 You asked for it and now we’ve answered. The new P365 XL from Sig Sauer was just released and fits nicely in comparison along with the Glock 48. The 48 is a little larger in all aspects and holds 10+1 rounds. The XL features a flush fit 12+1 round magazine that tucks neatly in the beveled mag well.

The XL is already optics cut for the anticipated release of the new micro, micro red dot sight. Speaking of releases, if you look on SIG’s website the XL doesn’t even show up yet though we’ve seen a few others purchased from FFL dealers just like ours was.

Both firearms have extended beavertails and cocking serrations front and rear. What stands out the most is SIG’s full-length recoil system. You’ll notice the guide rod and spring extend all the way to the front of the firearm, whereas Glock kept it simple and gave us the same shorty system from the 43X. While that keeps things simpler and cheaper for production, it hasn’t exactly made for happy end users. Many who have shot the 43X and 48 side by side have reported the 43X is faster for follow up shots while you’re waiting on the floppy 48 to calm back down. This is not an issue for the XL, as it feels almost identical to the shorter 365 slide’s recoil.

The grip on the 365 XL has plenty of texture to maintain proper grip under fire. While the 43x and 48 grip have both felt fine to me in the past, they are definitely lacking when shot alongside the XL. The SIG P365 was famous for its primer drag issues though they are common in small framed 9mm handguns. We paid close attention to this and have found with the overall increased mass of the 365 XL, its a non-issue. It cycles at a slower rate which allows the firing pin to turtle its way back into the firing pin channel prior to ejection and extraction.

With the XL, you’ll also get night sights right from the factory. The front green dot is larger than the rear, allowing for quick recognition of the front sight under stress. The Glock comes factory with their plastic sights, which is nice if you plan to upgrade so you don’t pay twice for quality sights.

If you read our first article on the XL, we mentioned a couple failures to feed due to the nature of the insanely strong magazine springs. We haven’t had a single issue since the initial run through each magazine we have. So if you are running any of the newer mags, make sure you cycle some rounds through each of them prior to carrying.

All in all, we are leaning towards the P365 XL while the 48 does have some highlights as well. With larger hands, I appreciate the size of the 48 a little more. Once Shield Arms releases their steel-bodied, flush fit, 15 round magazine for the 43X and 48, it’s going to be a little harder to decide. If you have any questions regarding the XL or 48, please add them in the video comments and we will answer everything we can. Stay tuned, as we have more XL content coming right around the corner!

Previous article: In the Hunt - 04 - Wyoming Coyotes Next article: [VIDEO] The Happiest Place On Earth Can't Save You From Violence