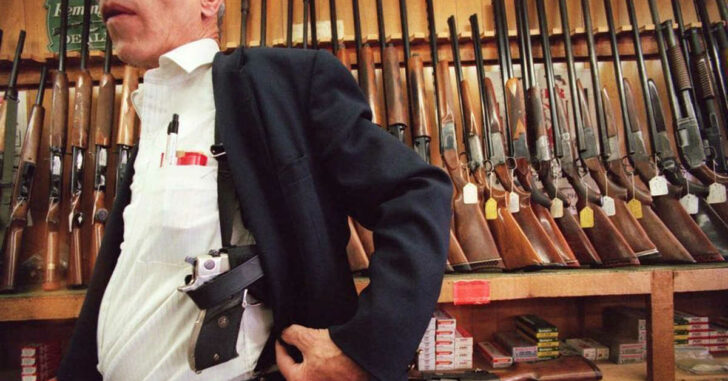 We talked about a recent push for National Reciprocity awhile back. Now, it’s starting to gain some momentum. After all, if your state thinks you’re good to carry a concealed firearm, why shouldn’t the other states think that too? More importantly, why should New Jersey get to throw any law-abiding gun owner in prison for a decade because he accidentally drove down the wrong road?

Even Presidential candidate Donald Trump has brought the issue to the forefront, with a renewed push to get a concealed carry license issued by any state to be accepted by all states — just like a driver’s license.

“There are 13 million right-to-carry permit holders in the United States,” he said. “I happen to be one of them. … Nobody knows that.”

Quite a few people know that — including our dear readers at Concealed Nation.

However, reflecting the very stark contrast in our current presumptive Presidential race, we’re now faced with someone who wants to push national reciprocity — which we’re in favor of — with someone who believes that people have a right to wave a wand and make guns disappear.

“Parents, teachers and schools should have the right to keep guns out of classrooms, just like Donald Trump does at many of his hotels, by the way,” Mrs. Clinton said at an event in Florida. “This is someone running to be president of the United States of America, a country facing a gun violence epidemic, and he’s talking about more guns in our schools.”

Which constitutional amendment in the Bill of Rights is that, Mrs. Clinton?

There’s the second amendment which promises that all Americans have the legal right to keep and bear arms but there is absolutely no mention anywhere of any constitutional amendment specifying the right to keep guns out of anywhere.

If you don’t want to have a gun in a place, don’t carry one. But there’s no imaginary rule that exists that will magically make all the bad guys leave their guns at home. Conversely, there’s no magical sign you can put up somewhere that makes crime disappear.

To stop a bad guy, you need a good guy with a gun. And the more places that good guy can carry, the fewer places the bad guy can without being challenged.

National reciprocity won’t work. It tramples states rights and not every state has the same criteria for issuing a concealed carry license. Moreover, even if a federal law somehow managed to make it through Congress and onto President Trump’s desk, it couldn’t be legally implemented as such.

“To make that law more uniform would be very, very beneficial not only to the concealed carry permit holders, but also the law enforcement. … I think it’s a win-win on both sides,” Charlie Curie, 63, said to the Washington Times.

The easiest solution is this: permitless constitutional carry nationwide.

The NRA-ILA won’t back it and certainly there would be a great deal of resistance at every corner, but it’s literally the only way that you can have all fifty states acknowledge a gun owner’s right to carry a concealed handgun on his person.

Disagree? Tell us about your thoughts on national reciprocity and how you can foresee implementing in the comments section below.

Previous article: #DIGTHERIG - This Guy and his Glock 19c in a CrossBreed Holster Next article: Guide To Popular Concealed Carry Handguns Chambered In .380 ACP