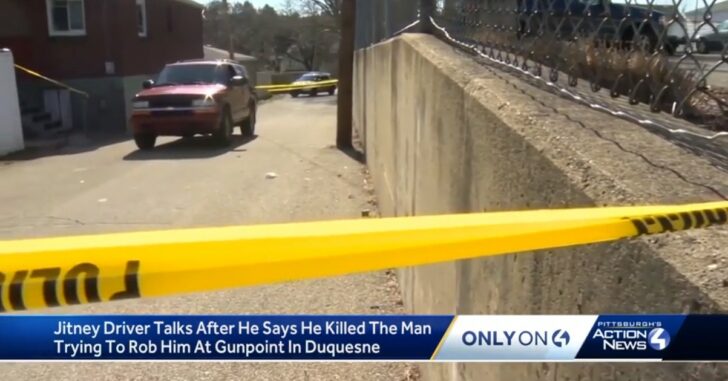 DUQUESNE, PENNSYLVANIA — Prior to this article, we didn’t know what a jitney driver was, but it appears to be in the same category as an Uber or Lyft driver. With that information, a jitney driver was taking two passengers to their requested location, when things turned ugly.

The driver, 73-year-old Crosby Marshall, knew something was wrong after the passengers were telling him to go down some back roads and alleys. Then, the male passenger announced a robbery and produced a firearm, striking Marshall in the face.

At some point, Marshall was able to get out of the car. The female passenger ran off, but the male passenger pointed his gun at Marshall.

Little did the armed passenger know that Marshall was armed as well, and he drew his firearm and shot multiple times.

The armed passenger did not survive the encounter that he created.

Marshall, a concealed carry permit holder, is not expected to face any charges.

When companies such as Uber say that their drivers cannot be armed, we are reminded of stories such as this one. There have been many instances of self-defense that we’ve covered in the world of ride sharing. If an armed citizen is forced to be unarmed, they should be looking for a new job IMO.

Previous article: 17-Year-Old Shot and Killed in what Police are calling a Self-Defense Shooting Next article: [VIDEO] Woman Targeted After Withdrawing $75k From Bank, Bad Guys Bring Violence But Do Not Succeed