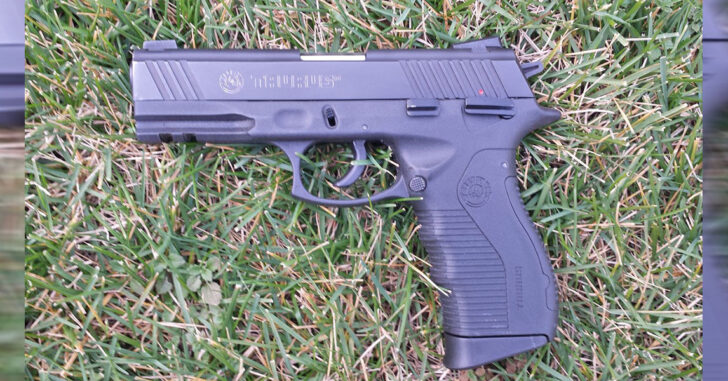 Many people are looking for quality made handguns with a budget mindset. I am often asked, “what is the best handgun for the least amount of money?” I am not prepared to say the Taurus PT 809 is the best budget handgun available however for an average price of $225, it is worthy of consideration. The Taurus PT 809 has several features that are often not available on other handguns in that price range. A 17 round magazine, 1913 forend rail, novak sights, double/single trigger, ambi controls with a full size grip are just a few worth mentioning. Many Taurus fans consider the PT 809 the “gold standard” among the Taurus line of handguns given features offered for the cheap price. In this review, I will give my thoughts about what I found “good” and “not so good” with this handgun.

At first glance, the PT 809 is an attractive pistol. It has nice lines and points well. The grip has nice texturing with the choice of three backstraps along with slight finger grooves. A magazine release button is located on both sides of the grip. It’s a bit stiff however the magazine deployment is fairly strong. The magazine is quality built that holds a full 17 rounds. It has an extended pinky rest baseplate and a yellow follower. The slide has deep cut serrations in both the rear and front. The slide stop is also ambidextrous making this gun left handed friendly. The PT 809 has a thumb safety which allows the gun to be carried “cocked and locked” or simply utilized to lock the trigger in double action mode. It will also lock the slide from charging. The thumb safety also acts as a decocker by pushing downward which will safely drop the hammer. The forend has a 1913 rail to attach the shooter’s favorite accessories and the middle of the frame has a slight indent for the shooter to rest their weak side thumb with a strong grip. The three dot sight picture works well by using novak sights which are well known in the handgun market.

My range time with the PT 809 went fairly well. The PT 809 fed through 50 rounds of Speer Lawman 124 grain 9mm like nothing. Every round fed, fired and ejected just as one would expect. The trigger action was quick and the single action pull was very nice. I found the double taps and three shot bursts to work really well. Also, being a heavier handgun, there was little to no felt recoil when shooting.

The features available on this gun are impressive. It ships with a hard plastic case which includes three backstraps, and internal trigger lock key, a speed loader, cleaning rod and two 17 round magazines. I like the fact the entire pistol is ambidextrous and overall has a quality feel to it.

The price is amazing. I checked gunbroker and the PT 809 is offered from various sellers for the lower $200s which makes this pistol a great bargain. Very seldom will we see a gun that offers so much for such little money.

The “Not So Good”

Let me get straight to the point. I had trouble consistently hitting my 10” target at ten yards. I realize that every handgun needs a slight adjustment to learn how it’s best to align the sights and pull the trigger however I had trouble figuring this gun out. Each time I felt like I was making progress, I found myself having to re-adjust my original adjustment. Yes, each shot would have been combat effective in a self defense situation however this is not the type gun I would recommend for pin point shooting or competition.

Secondly, I feel that 17 rounds in a compact size gun is impressive. The mags are quality built and feel very tough. I am glad however that Taurus includes a speed loader in the case. I had trouble loading more than 12 rounds in the mag by manually inserting the rounds. The magazine spring is extremely tight and loading the rounds are a bit of a thumb breaker. I know you are thinking, “c’mon wimpy don’t be a baby and push the rounds in the mag.” I would simply mention that it’s harder than it looks.

To disassemble the PT 809 is a simple process that many of us are familiar with. Once assuring the gun is unloaded and safe with the magazine removed, simply pull back the slide approximately a half inch. With the opposite hand push down the takedown levers located on the frame just above the trigger. At that point the upper will slide off the frame without the need to pull the trigger. The captured recoil spring/guide rod and four inch barrel can be removed to complete the process. To reassemble, insert the barrel and place the recoil spring/guide rod into position. Align the upper slide to the frame rails and pull the slide back. At this point, the pistol is reassembled.

Overall, I feel the Taurus PT 809 is a pistol that offers a lot for a very fair price. It is definitely a budget gun that should work well for carry and home defense purposes. Being a guy who has been called a “gun snob” in the past, this particular gun would not be my first choice to edc. I do however feel it would suit the needs for someone who is budget conscious. The handgun feels well made and offers quite a bit for it’s price.