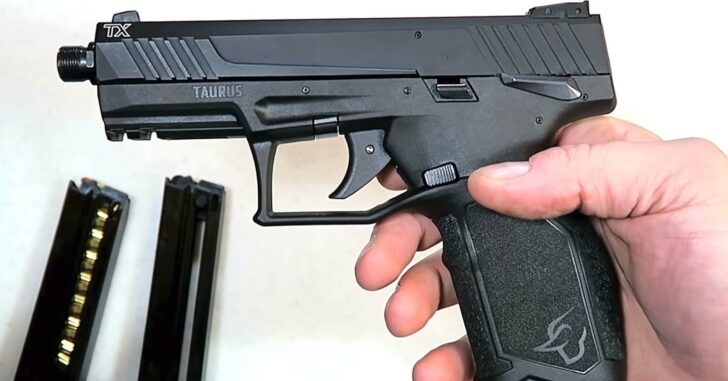 In January 2019, Taurus USA announced they were on the verge of releasing a new compact size .22LR pistol to the market called the Taurus TX22. The Taurus TX22 steps away from the typical .22LR handgun and offers several features that are unique to the rimfire platform. Also, remaining consistent with Taurus firearms, the TX22 is budget-priced while not lacking quality. I immediately called this pistol Taurus’s new “rockstar.”

Let’s start with the bottom line. The MSRP for the Taurus TX22 is $349. At the time of this review, it is selling for around $300. I believe this price point will remain consistent until the pistol is widely distributed. Then, I expect the average price to decrease around $25 – $30.

Aesthetically, the Taurus TX22 is fine looking pistol. The forward slide serrations along with eye-catching slide engraved slide machined cuts give the upper an aerodynamic look. It is complimented by the polymer frame that offers similar cuts and grooves that make the TX22 one uniquely handsome pistol.

The full-size grip on the TX22 has excellent ergonomics. The stippling reminds me of a light grit sandpaper. With the help of an undercut trigger guard and three finger contact, the high grip offers complete control when shooting the TX22.

The Taurus TX22 is a light handgun. It uses a polymer frame and an aluminum slide. It’s unloaded weight with a magazine inserted is 17 ½ ounces. It’s fully loaded weight with 16 rounds is 19 ⅝ ounces. That is very light considering the TX22 is a compact size pistol.

The TX22 comes with two 16 round magazines. When compared with the Ruger SR22 and the Walther P22, each of which uses a 10 round magazine, the TX22 offers six additional rounds. In other words, the TX22 has 60% more capacity than other handguns in the .22LR market.

The TX22 is a suppressor ready pistol. This feature was especially attractive to me because I have a .22LR suppressor. The threaded 4.1” barrel comes with a thread cap that gives the impression it’s a standard barrel. A quick turn of a wrench and the thread cap can be removed.

Taurus offers a threaded adapter in the case that easily screws onto the barrel. Throw a suppressed can on it, remove your ear protection and enjoy rimfire shooting to it’s finest.

Unlike most hammer-fired .22LR handguns available today, the Taurus TX22 is striker-fired. Better yet, the single action trigger pulls at just 4.5 pounds. The precision design of the TX22 trigger is known as the Taurus Pittman Trigger System (PTS). Given it’s single-action, short and audible reset, the follow-up shots are quick and accurate. The Taurus TX22’s trigger action combined with 16 round magazines created one of the finest rimfire range sessions I have experienced.

Additional features for the Taurus TX22 include an ambidextrous thumb safety, a forend picatinny rail for lights and/or lasers, a three-dot sight system with adjustable rear sights a large trigger guard for comfortable gloved hand shooting. The TX22 also has a disassembly process unlike any I have seen before.

To disassemble the Taurus TX22, remove the magazine and assure the gun is unloaded. Point the gun in a safe direction and pull the trigger.

Slightly move the slide back and pull down the take down tabs directly in the center of the frame. Grip the slide and push forward to release the slide from the frame. Simply remove the captured recoil spring/guide rod and barrel to complete the disassembly process.

I took the Taurus to the range on one of the windiest and coldest days of the winter. The TX22 performed as I hoped it would. As the video demonstrates, I was able to hit my targets with ease.

One suggestion that many of my viewers requested was for me to run through several types of .22LR ammo through the TX22. I brought out four different brands of .22LR and the TX22 handled each type just fine. I had one failure to feed out of eight loaded magazines. Prior to this range session, I took the Taurus TX22 to an indoor range to function test it. I ran four mags through it to get a feel for the pistol. This experience had me believing even further that Taurus has a “rockstar” on their hands with the TX22.