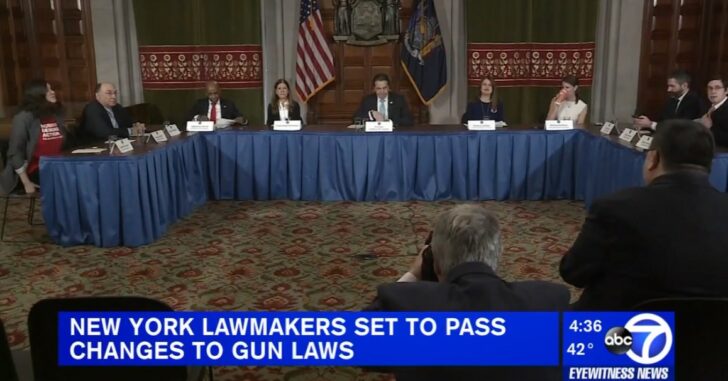 NEW YORK — A state with one thing on it’s legislative mind: Have the toughest gun laws in the Country.

Success was made today.

The Democrat-controlled New York Legislature has passed a series of gun control measures, including one that would prohibit teachers and other school employees from carrying firearms on school grounds.

The legislation that easily passed the Assembly and Senate on Tuesday also includes a measure that authorizes the removal of guns from the home of a person who has been deemed a risk to themselves or to others. Under the “red flag” bill, a court could determine if firearms should be taken away from someone considered dangerous or mentally ill.

Other approved legislation included a bill to extend the waiting period from three days to 30 days after an inconclusive background check before a gun can be purchased.

While all of these laws are sure to prove useless, the most useless of them all is the prohibition of teachers and school employees from carrying firearms on school grounds.

Under current New York State law, a teacher or faculty member (or anyone for that matter) can carry a firearm on school grounds if they have written permission from the school. While I don’t have numbers on how many of these approvals are a reality, I’m having a hard time finding any information on incidents where someone carrying a firearm legally on school grounds in New York has been an issue.

Let’s not forget that the shooting in Parkland, Florida could have been stopped early, had the armed person already present fulfilled his duties to protect students.

As we are a concealed carry website, it’s only fitting that we support trained people to carry firearms on school grounds. An outright ban of such a potentially useful resource is outrageous to me, and solidifies sitting ducks across the State.

No longer is there an option, outside of an armed resource officer or police officer, to meet a threat such as an armed gunman with equal force. I’m not sure how many schools in the State have either, but I’m certain that it’s not all. And while those schools remain unarmed, they remain the best targets for those looking to do harm.

This is the reality today, and suppressing the law-abiding, trained and good people of this world will do nothing to stop the bad.

Previous article: The Latest Mass Shooting In FL Should Be An Eye-Opener For The Masses Next article: South Dakota Will Become The 14th Constitutional Carry State Tomorrow, After Governor Pledges To Sign Bill