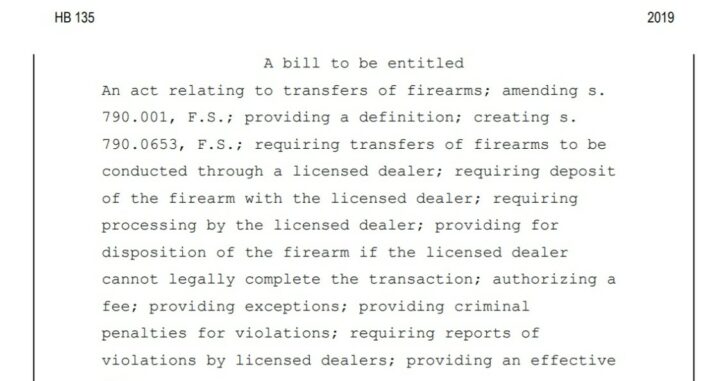 Florida Democrat state representative Margaret Good has filed House Bill 135, the latest gun control bill to be introduced in the Sunshine State. In some respects it’s your typical universal background check bill that would outlaw all private transfers of firearms and require that sellers and buyers use a federally licensed dealer as the middle man to perform a background check.

Under current law, if a child is 16 but below 18, they can legally possess a firearm in their residence with a parent’s approval. The proposed UBC bill would scrap that. No one under 18 could be loaned a firearm unless it’s “for lawful hunting or sporting purposes or for any other 99 lawful recreational activity.”

The only uncontrolled legal transfer between two people allowed under the bill would be lending someone a gun “solely for the purpose of shooting at targets, if the loan occurs on the premises of a sport shooting range, and the firearm is at all times kept within the premises of the sport shooting range” or to someone at least 18 years old who is “using the firearm for lawful hunting or sporting purposes or for any other lawful recreational activity” and remains under the direct supervision of the owner.

HB135 piles onto the restrictions signed into law after Parkland by Governor Rick Scott. Under current law, anyone under the age of 21 cannot legally purchase a firearm through a dealer or private sale. But they can be legally gifted a firearm from a parent. So little Johnny or Suzy who’s going off to college can still legally have a long gun for sport or self defenseso long as it was a gift from a parent or guardian.

HB135, however, requires a background check for all firearm transfers outside of a shooting range or hunting event. So if little Johnny or Suzy wants that shotgun that Grandpa left for them when they turn 18, they’re SOL. That transfer would have to go through a dealer and the dealer can’t transfer a firearm to someone under the age of 21.

Then there’s this. Background checks aren’t required if the owner is giving his gun(s) to…

What does that mean? It means that if you’re planning a trip you can legally leave any guns you’re not taking with you at home, with an adult family member. But you can’t be gone for more than 14 days.

Planning a three-week driving trip around the country? Is your job sending you to New York for a month for training? Are you in the military and being deployed for six months?

Then you’d have to have all of your firearms transferred through an FFL, even if you’re leaving them with an adult family member. Even if they live in your home.

What are the chances of this bill moving through the legislature? Well, Senate President Bill Galvano (R) took $200k from Michael Bloomberg and authored last session’s gun control bill. He’ll probably support HB135. So will Jose Oliva (R), the current House Speaker who not only voted in favor of the SB7026 when it passed in March, he even gave it a standing ovation.

So the chances are pretty good this bill would be steered by the House Speaker into a favorable committee or two and passed with at least some Republican support. I’d except the Senate to do the same. The question then becomes whether incoming Governor Ron DeSantis — who campaigned on a pro-gun platform — will veto the bill. And then whether the legislature will have enough votes to override him.

Keep your eye on this one.