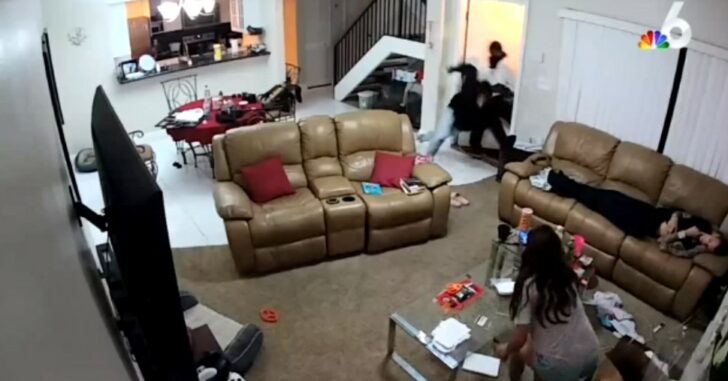 PEMBROKE PINES, FLORIDA — Two people had their morning turned upside down when two thugs came into their home via an unlocked front door. It happened on August 29th at around 4:30 am, and the man asleep on the couch didn’t even realize what was happening for at least a few seconds.

By the time he woke up and recognized the intrusion, the woman at the home was already under the control of one of the thugs.

Give the home surveillance video a watch below:

We talk about carrying at home a lot, or at least having your firearm close by. Things can happen so quickly, as we can clearly see in this instance.

As a woman sat on the floor going through her phone and a man slept on the couch, “two unknown males unlawfully entered” the house through the unlocked front door, the Pembroke Pines Police Department said.

One suspect was armed with a handgun but no shots were fired. The male victim sustained minor injuries and the woman was not injured.

The two thugs got away with some valuables, but their victims’ sense of security is forever broken. Had the door been locked, they could have simply kicked it in, but it’s still a reminder to make sure that we have our doors and windows locked. At the very least, it’ll slow the intrusion process down, even if it’s just for a few seconds.

Reminder: Lock your doors and windows, and always have your firearm in a safe location where you can get to it quickly if needed.

Things can happen this quickly.