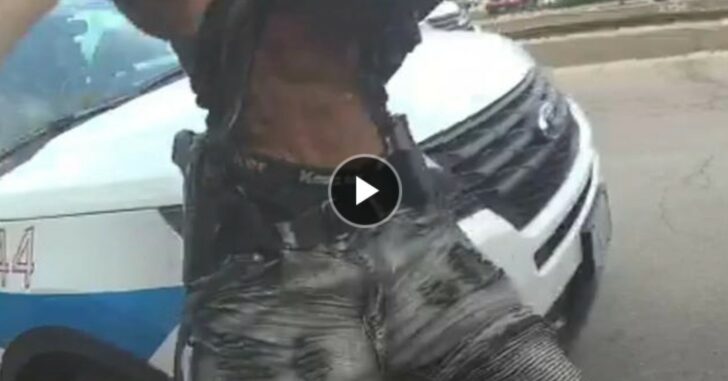 CHICAGO, ILLINOIS — Any loss of life is tragic, and it’s something that we never want to see. When the lives of others are in danger, however, there is sometimes the need to defend oneself against that threat.

A man who was shot and killed by police had hundreds of protesters come out, and they’re not happy with the police action.

The man killed, identified as 37-year-old Harith Augustus, was a barber and father to a 5-year-old girl. Police confirmed that Augustus had a FOID card that allows him to own a pistol, but that he did not possess a concealed carry license with the state.

The video of the incident, without audio, can be viewed below:

At the beginning of the video, Augustus can be seen retrieving what looks to be a wallet from his back pocket. He could have been getting his ID for officers or his FOID card, but that is not yet known. What is known is that things escalated quickly right after this happened.

Police have maintained that they shot Augustus only after he reached for a weapon under his shirt. The bodycam footage of the incident shows at least four officers approach Augustus. A brief struggle ensues after a female officer grabs his arm. He is then shoved with his back to a police vehicle.

At this point, police froze the image to show a holstered pistol and what appears to be an ammunition magazine. The video resume, showing Augustus getting away and walking into the street, where he appears to reach for the weapon. At that point one of the officers discharges their weapon several times, fatally wounding Augustus.

The State of Illinois does not recognize any other state’s concealed carry permit, so there should be no reason that he was looking to show officers a different state’s permit to carry.

If Augustus was legally owning his firearm but not able to legally carry, he could have been afraid of being prosecuted. However, letting police handle the situation by telling them that you have your firearm and letting them proceed is the right way to go.

The video clearly shows Augustus trying to draw his firearm, and that’s a bad situation all around. ANY concealed carrier who attempts to reach for their firearm while in the presence of police is asking for some serious trouble.

This is definitely a story that we will be watching.