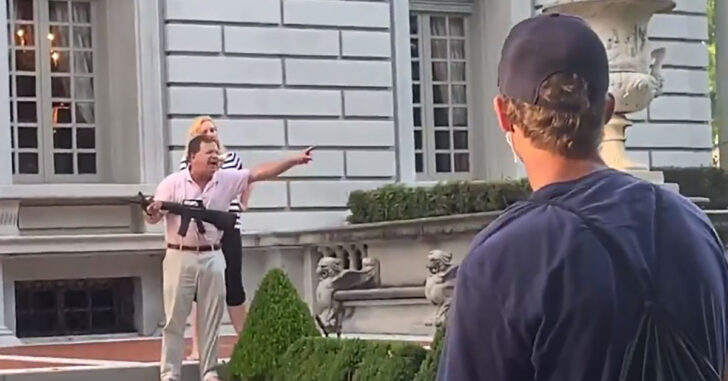 ST. LOUIS, MISSOURI — A couple in an upscale neighborhood has been seen by millions on the internet after they came out of their home with guns to defend their property as a group of protesters walked by.

To be fair, the group of protesters were technically trespassing inside the private community. Some have called the armed couple’s actions over the top, but given recent events, I don’t (completely) feel the same way.

HOWEVER, their gun safety skills have been rated 2/10.

Well look at that…
pic.twitter.com/vUfm3WFdDd

That’s the group going through the gate that’s clearly marked.

Showing force while on your property, especially given the climate of the Country over the past few months, isn’t something that we can completely fault them for.

The way they display their firearms, though, is absolutely uncalled for. Both point them at protesters, and the woman has her finger on the trigger for much of the time as the firearm is pointed directly at the crowd.

A couple has come out of their house and is pointing guns at protesters in their neighborhood #StLouis #lydakrewson pic.twitter.com/ZJ8a553PAU

I’m not saying the couple is paranoid, but they could be a little paranoid. What’s a good rule when defending your home? Stay inside and get yourself tactically ready, should the group enter your property.

The group stayed behind the property line, not extending past the sidewalk. So what does this translate to when the protesters entered private property in terms of the neighborhood? A legitimate show of force? Assault charges for the couple?

Again, these two need to get some training ASAP. If people were to ever enter their home, they’d be candidates for shooting each other during the invasion. Let’s hope it never happens, but damn, get some training.

If I had to profile the dude I’d say he has it almost like someone owns a sports car. It’s a neat thing to own but it doesnt mean you’re a grease monkey. (I’m joking about training but I’m sure the guy never thought he’d have to be in that position) good on him though 👍 pic.twitter.com/UzwJUyUTOI

What are your thoughts on this situation? Did the couple cross a line when trying to defend themselves, or were they justified in what they did?