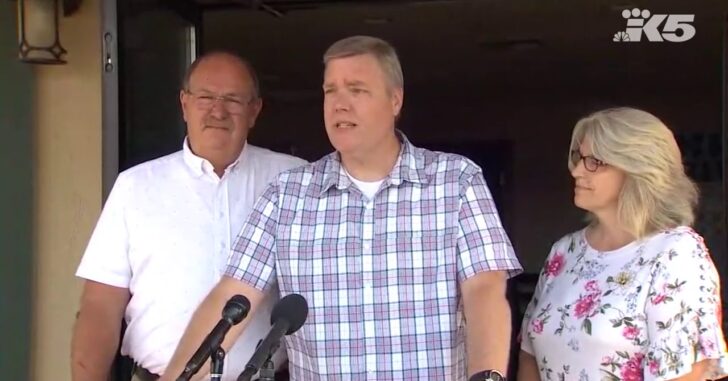 David George is the Pastor of the Oakville, Washington Assembly of God church, a range officer, volunteer firefighter and EMT, and a concealed carry permit holder. On Father’s Day of this year, an armed man went on a rampage trying to carjack multiple people. One child was injured and a man inside his vehicle was shot. George was inside the Walmart store when he heard what he thought was a gunshot.

“I was sure that what I heard was gunshots and I’m familiar … with how I should respond considering mine, my family’s and the public’s safety,” George told reporters as he stood outside his church.

He gathered his family together and headed for the doors. It is at this time when George was passed by the gunman waving his gun in the air.

“I followed carefully along with another citizen carrying a firearm, unaware of what the shooter would do next or where he would do it,” George said.

The gunman was then making his way to where George thought his family was, and it was time for him to intervene.

“When the gunman began threatening another person for the use of their car, I moved in order to have a safe shot at the gunman,” George recounted as he read from a two-page written statement. “He entered the vehicle, which I considered an ever bigger threat, and I fired to stop the shooter.”

After taking out the threat, George went to his vehicle to get his first-aid kit so that he could attend to the gunman’s victim that he had shot just moments ago. The victim’s family says that he is paralyzed from the neck down, but it is not known whether this will be permanent. We can only hope that he is able to recover from his injury. George and the other armed citizen happened to be at the right place at the right time, and George was able to quickly stop a deadly threat. That threat was not concerned with any other life but his own, and proved that he would do anything to get away. George will live with his actions for the rest of his life, and we hope that he can find peace. During his statement, which you can watch at the beginning of this article, he at times is visibly shaken by the events that took place. As a Pastor of a church, he will have a great support network of those who can talk with him and look after him in the wake of this incident.
Categories: General, News