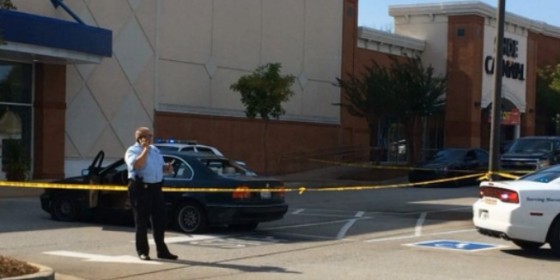 A Georgia man fired shots at a pair of robbers on Thursday while he was out at a GameStop to buy a game for his son.

The man, Tim Jackson, was inside the GameStop when he says a man walked in “as cool as a cucumber” and told everyone to get on the ground or he’ll start shooting. The robber apparently had an AR-15 with him and seemed very relaxed, as if it wasn’t his first time conducting an armed robbery. Jackson was just feet away from the robber, face down on the floor.

The robber apparently takes wallets and such from people and then leaves. Here is where Jackson’s moves come into question.

As the robber is making his way outside and to his vehicle, Jackson decided to follow him. He also decided to go to his car and retrieve his own firearm. Once he does, he begins to fire at the robbers inside of their car.

When interviewed, he said that he was not trying to shoot the robbers, but rather hit their windows so that police would be able to identify the vehicle if they were to get away.

Now that you have the details, does it seem necessary for Jackson to have gone after the robbers after the threat has passed? I understand his desire to try and stop this from happening in the future, but what if the robbers decided to shoot back? What if Jackson had fired and missed, and possibly hit someone in the parking lot?

Now, he did effectively stop them from leaving and they were both arrested by police. But the question still remains, would you have done the same thing?

Police have also taken Jackson’s firearm as evidence, which is a topic that we have brought up on numerous occasions as to the importance of having multiple firearms for concealed carry.

Previous article: You Are Invited To Dinner At A New Friend's Home, Do You Ask Permission To Carry Inside Their Home? Next article: You Won't Believe Why This 7-Eleven Clerk Shot A Thief In The Head