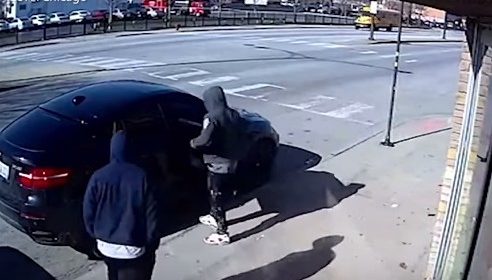 CHICAGO, ILLINOIS — Crime can come at you in an instant, and a car-jacking attempt usually occurs randomly and when the opportunity presents itself. These two armed thugs, however, picked the wrong person in their attempt, and it was all captured on surveillance video.

Surveillance footage showed the off-duty Chicago police officer sitting in a black BMW when two men, with their hoods pulled up, approached. The first grabs the front passenger side door and pulled it open, while reaching for something in his pocket and climbing inside. The cop immediately got out and raised his gun as a second would-be car jacker ran round to the driver’s side and climbs in the driver’s seat. The officer then began shooting at the thief in the driver’s side, while the first suspect climbed back out and began returning fire.

Before you watch the video below, there’s something to point out. It seems that the officer needs to clear his firearm at least a few times (looks like 3), telling us that he either had a failure to feed or a stovepipe. Either way, he was in a bad spot with the bad guys firing back while he needed to clear a malfunction. The point: Do you train to clear malfunctions? It could be a wise investment of your time.

Watch the video of the encounter: