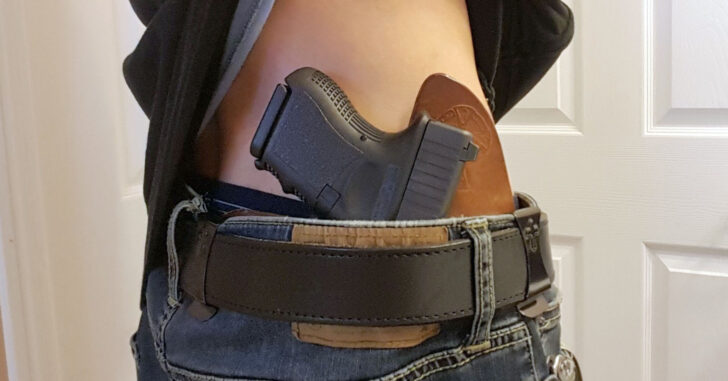 While this article is mostly for new concealed carriers, it plays a part for nearly everyone who carries a firearm. We’ve all been guilty of at least some of these movements and behaviors that can give away the fact that we’re carrying a firearm, but even if we’ve negated them all, it’s still worth talking about.

For the noobs, the longer you carry the less likely you’ll be finding yourself doing these things, so keep with it and pay attention.

While most people wouldn’t think twice about seeing you do anything listed below, some will know and could be paying attention.

Keep in mind that these moves will vary based on your carry position. The two most popular positions are Inside The Waistband (usually around the 4-5 o’clock position) and Appendix carry. With those different locations comes different movements, but for the purposes of this article, we’re looking at the most popular carry position; Inside The Waistband.

Lightly touching the firearm and/or holster to make sure that it’s in the proper position is something that we all do from time to time, but it should be something that we do in private. If you’re outside the home, a restroom is a great location to make any necessary adjustments. The number one time that I find myself doing this is right after getting up from a seated position. When we sit, our rig can have a chance to shift a little bit, and it may feel like it needs some adjustment when we stand up. If you feel you need to adjust, do it quickly and tie it in to the next point; the shirt tug.

A quick tug down on your shirt to make sure that your firearm is covered never hurt anyone, but making a habit of it will draw attention to yourself and that area. If you are wearing the proper clothing to cover everything that needs to be covered, there should be no reason to ‘tug’ at your shirt. An exception would be right after you’ve gotten up from a chair, in which case you may want to give your shirt a quick tug just to make sure it’s in the right spot. Again, this depends on your current outfit and will not be necessary for everything. After that however, leave it alone until you’re somewhere private.

With the first two points, if your rig is really out of place, you should realize this simply by how it feels. If you carry regularly, you should be very familiar with how your rig feels during your daily activities.

The “Just Making Sure It’s Still There” Move

Especially if you’re new to concealed carry, this is something that happens often until we are used to carrying on a daily basis. It’s usually just a quick touch of the back of the firearm while it sits in the holster. It’s part ‘make sure it’s seated in the holster’ and part ‘make sure it’s still there’. It’s also part ‘unnecessary’ because if you have a proper holster, it’s not going anywhere.

Some on our Facebook page even made note of the fact that they’ve been guilty of ‘resting’ their arm/hand on the firearm.

Pull Up Your Pants

Pulling up your pants is a little more difficult when you add a firearm into the mix. If you ever find yourself needing to lift up your belt and pants to a correct position, you may want to make a few adjustments. I’m not talking about pulling them up all the way from the bottom, either. Rather, the need to pull them up if they’re sliding down as you move about.

The first thing would be to make sure that your belt is tight enough, and that you’re using a proper belt for concealed carry.

On top of that, making sure that your pants are the right size can go a long way. Remember; if you’re introducing a holster and firearm into the mix, you’re likely to find that a pant size (or 2) up will better accommodate your new situation. Don’t go too large, though. Your pants shouldn’t be sagging.

Back to the belt; Remember that you have an extra pound or two (or more) that’s being supported by your belt, so it’s important to have a sturdy belt to keep things up.

I tend to put an emphasis on printing because I’m not a fan. Some think that it’s not that big of a deal and that’s fine, but I do what I can to avoid any printing. The entire point of concealed carry is keeping it concealed and unnoticed so that no one knows you are carrying. If you can do things to avoid printing even further, why not do that?

The only way to tell if a shirt is going to work is to throw it on with your rig and check yourself out in the mirror. Some of your favorite shirts may simply not work anymore and should not be worn. If you see excessive printing, it’s best to avoid that shirt and move onto another one. Or, throwing on another layer (weather permitting) may solve any printing issues, such as a sweatshirt.

Some people will fight me day and night on this point, but I stand by my reasoning.

Put it this way; if you’re at the bank with two other people and you’re the only one with an NRA hat and an “I love the 2nd Amendment” shirt, guess who the bank robber is going to watch the closest. Sure the chances are slim, but the reason we carry is so we’re prepared. This is just another step in preparedness, and it’s called blending in.

Reality tells us that the people who will notice are people who are also carrying guns. That’s true, but it’s not a solid response. Others at times will notice what they’re seeing. Again, we’re concealed carriers. Not printing carriers.

Not Swinging Your Arm On The Side You Carry

This is a big one that most don’t even realize they do until someone mentions it.

For instance, if you carry on your right side, your right arm is likely to swing much less than your left when you walk. It’s a way that we protect our firearm without even noticing that we’re doing it.

It’s the same as if you have hip pain on the right. Your right arm is naturally going to stay close to that hip in order to deflect anything that may come to harm it. That barrier is all instinct, and it’s the same when your brain is trying to protect your gun.

Yelling “Tyrants!” After Seeing A Business With A “No Guns” Sign

If you do this, someone may know you’re carrying a gun. Instead, get on your phone and leave the business a ‘Tyrants!’ review on Google.

Just kidding. Don’t really do that. Or do.

What this all boils down to is this; While many won’t notice what you’re doing and how you’re doing it, some will. It’s important for us to be mindful of how we behave in public, and we try to do what we can to not draw attention to ourselves.

Some of the points are less important than others, but the whole package is something that we should give some consideration to.

After all, it’s only you that should know you’re carrying a concealed firearm. The only other person that should find out is the bad guy, who you hopefully never have to encounter.