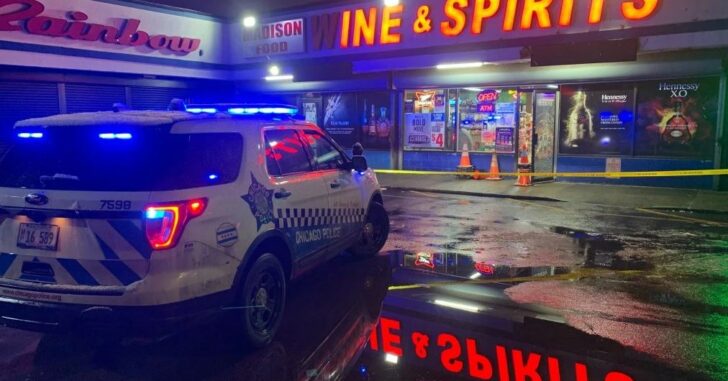 CHICAGO, ILLINOIS — When this story initially was released, it was thought the actions of the security guard were justified. However, after further review of the case, the security guard has been arrested. There are a couple of factors for this.

Walton was working as a security guard about 11:30 p.m. when he and the 28-year-old man got into an argument inside Madison Food, Wine and Spirits, 3900 W. Madison St., police said. The argument turned physical and Walton shot the man three times, hitting him in the back and leg.

Alphonso Walton, 40, is charged with one felony count each of attempted first-degree murder, aggravated battery with a firearm and unlawful use of a weapon by a felon, according to Chicago police.

What we know is that Walton was working as security at a liquor store in Chicago. During Walton’s shift he got into an altercation with another man in the store. The argument turned physical and the two men started fighting.

At this point, Walton drew his firearm and shot the man. He struck him three times. The man suffered wounds to his back and his legs. Police were called to the scene. The injured man was taken to the hospital.

At this point, it would seem that the security guard was doing his job. Because of his position as security guard, it would be easy to assume the man he shot was trying to do something illegal. However, further investigation into the matter proved otherwise.

For starters, lets talk about the fact that Walton was working as an armed security guard, as a felon! This raises all kinds of questions. Was he working for an agency, and did they know he was armed? Was he freelancing and the store owner knew he was carrying while also being felon?

Secondly, although we don’t know the details of the argument, clearly whatever happened between Walton and his victim was personal. Walton, while on the clock for his employer, got into a fight with a guy and shot him. Worst employee of the year candidate right here.

Not much good to talk about from this encounter. Let’s give some props to the police though. It didn’t take them long to figure out Walton was not justified to shoot this man, and that Walton was also carrying a firearm illegally.

Previous article: Armed Man Tries To Rob Group Of People At Gas Station, Is Shot By Armed Customer Next article: If Elected, Biden Promises To Put Beto O'Rourke In Charge Of Gun Control