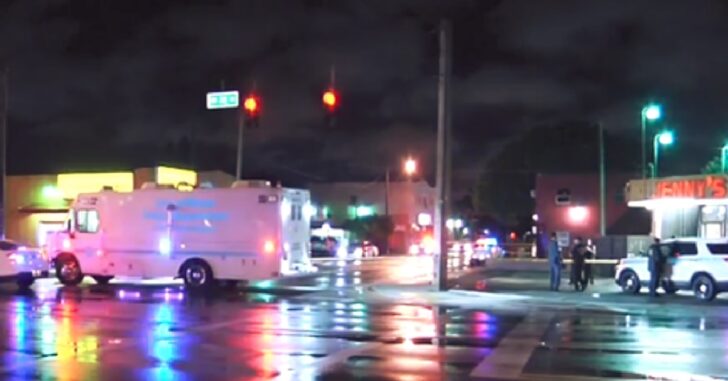 MIAMI, FL — A man was shot and killed by a member of a trio of would-be victims he intended to rob earlier on the night of his death, WSVN reports.

The dude didn’t know what was coming his way, and he paid for it with is life.

City of Miami Police responded to the scene of the crash at Northwest 30th Street and 22nd Avenue, just before 11 p.m. Police said the suspect, identified as 24-year-old Francisco Martinez Jr., was found with gunshot wounds to the chest. Investigators said Martinez attempted to rob three victims two blocks away, in the area of Northwest 22nd Avenue and 28th Street.

Willie, an area resident, said he heard gunfire. “I started to walk all the way to the corner right here, and that’s when I started hearing the shooting, ‘pow, pow, pow, pow,’” he said.

Willie said he then witnessed part of the ensuing confrontation. “I started to see them struggling with each other in the cars. Then they start shooting at each other,” he said.

Police said Martinez took off after he was shot in the chest. Moments later, he slammed his car into a fence… Neighbors awakened by the crash found Martinez unresponsive and tried to revive him… Martinez was transported in critical condition to Jackson Memorial Hospital, where he was later pronounced dead.

Good form in placing shots on the attacker’s chest — it’s horrifying to think about the attacker escaping only to become an equally large threat on the road in a vehicle with practically no control of their environs.

For those who attempted to revive him — they might not have known it, but it was a brave call. You see all the time how poorly Good Samaritans are sometimes repaid, and although they didn’t save this thug’s life, they gave him an extra chance.