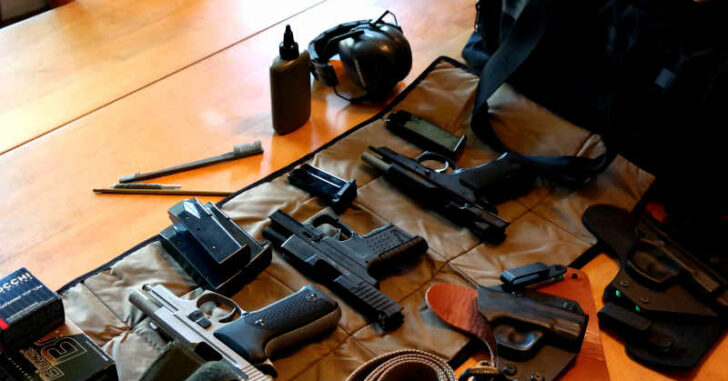 However, there’s things your concealed carry handgun can’t do and shouldn’t be required to do. In this article, we’ll address a few key points as to what to expect from a concealed carry pistol — and what’s outside the realm of reasonable expectation.

Magazine Capacity Comes At A Price

If you want to carry a pistol with 15 rounds in the magazine, just know that it’s not going to be the most readily concealable gun on most people’s frames. There will be “show” and “print”.

The more rounds you want to carry in your concealed carry handgun, the more space you’ll have to provide for it to fit on your person. This will boil down to personal comfort level — i.e. the comfort of storing a bigger gun on your person — and concealability.

As a general rule, the most concealable, compact concealed carry handguns are generally an inch or less in width and less than five and a half inches in height. The more rounds you need in a magazine, the longer the height.

This is why we discuss double stack versus single stack to such great length.

Medium (25-50 yds) to long range (100+ yds) shots are out of the question. While in perfect range conditions — no wind, no stress, optimal ammunition and pistol rest — a pistol shooter can train to hit a 3-5″ group. I’ve seen expert shooters hit targets with a pistol at 100 yards with a calibrated red dot sight. Yes, yes, yes. It’s possible.

In a defensive situation, there are no ideal conditions. There’s going to be a breeze, you certainly will be stressed, and getting a nice well-supported shot is almost entirely out of the question.

Most concealed carry pistols are designed with 4″ and below barrel length.

Almost all concealed carry handguns are designed to address situations between 1 to 15 yds. After 15 yds, the grouping of the shots will begin to spread out and by 25 yds, tight shot groups are almost out of the question for the average concealed carrier.

The Bigger The Bang, The Sharper The Snap

Full-sized pistols have a lot of room for engineers to design recoil compensation. This allows the shooter to feel a more fluid experience when firing larger calibers — such as the 10mm or .45 ACP.

In an older review, I discussed how my .40 S&W M&P Shield had a lot of snap to it. Despite my preference for the M&P Shield at the time, I found the larger caliber required a far greater degree of control to ensure steady follow-up shots.

This also held true for the Glock 36 that I tested. Chambered in .45 ACP, it held six rounds and was easy to conceal. At the range, I found the recoil on the G36 to be definitely more noticeable than, say, the G43. That’s no surprise. But, for concealed carry, I’m interested in tight, fast follow-up shots. This made the G36 less ideal for my shooting style than the G43.

Carrying Concealed In Small Calibers Comes At A Price

Traditionally, concealed carry pistols came in much smaller calibers — such as .32 or .380 Auto. These rounds typically didn’t have very good penetration but could be packed into smaller framed pistols much more conveniently.

A .380 Auto round can be just as lethal as a .40 S&W if put in the right spot. Unfortunately, in defensive situations, it’s all about neutralizing the opponent during high stress moments.

Adrenaline is pumping, the bad guy is moving in to do damage, and the last thing a concealed carrier wants to worry about is the bad guy walking away because the wound channels created from four sporadically fired .32 caliber rounds didn’t do the trick.

Yes, smaller calibers generally allow higher capacity and smaller framed pistols that are easier to carry concealed. No, they aren’t a one-size-fits-all approach to defensive situations.

Know What Your Concealed Carry Pistol Needs To Do

This may take training on your part and familiarity with the handgun.

However, it’s unreasonable to expect a small sub-compact or micro-compact handgun to stand up against a full-size pistol and perform to the exact same standards.

Choose the specific situation you want your concealed carry pistol to address and equip it to accomplish the mission. There’s different tools for each situation. Choose yours and carry it every single day.

Previous article: TEXAS DAD: Father Shoots Gunman Who Threatened His Family at Popeye's Restaurant Next article: 5 Times When It's Okay To Sacrifice Size For Concealment