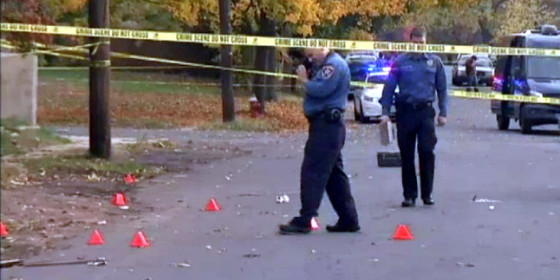 PLAINFIELD, NEW JERSEY — A violent gun battle between two armed thugs with illegally obtained guns spilled over onto the front stoop of a little girl’s home.  A 6 year-old was playing on the front porch when one of the thugs ran for shelter after being shot multiple times.  NBC 4 reported that the unnamed criminals continued in their gun battle, resulting in the little girl getting caught in the crossfire.  She was struck twice in the leg after the criminal tried to enter the house unsuccessfully.  He then fled to another home and tried to open the door before collapsing to the ground and dying at the scene.

The little girl and her aunt were both grazed by bullets and were treated.

“He tried to go into the other house,” said neighbor Jose Hernandez to NBC 4. “The door was locked, when he pulled the door he went to the ground because he was shot. I don’t know how many times.”

The news report suggests that not many people are talking about the gang activity that occurred.  Though neighbors were dismayed and frightened by the brazen attack, none appeared willing or able to do much about it.  The uncle of the girl who was shot told reporters he fears for the lives of everyone in the house after the attacks, fearing reprisals for being caught in the gang-related activity.

This is what happens when people aren’t allowed to defend themselves.

Even now, Plainfield police are probably racing to solve the next violent crime happening within blocks of this one.  It’s an out of control situation in New Jersey, made worse by punishing law-abiding citizens and rewarding criminals.