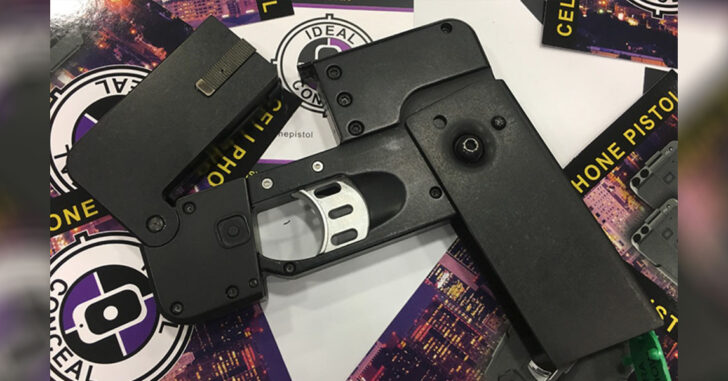 Back in March of 2016, we reported on a new gun prototype that was designed to look like a cell phone and then fold out into a fireable gun. The name: Ideal Conceal. I wasn’t sure about it when I saw it, and haven’t really given it much thought since. At the time, I requested information and a sample when it was available, but I never got a reply.

Then today, my friend Dan over at TTAG posted an article after he saw the firearm up close and personal at the NRA show. So naturally, I had to take a closer look at it to see what they’ve done over the past 2 years.

Here are some details to get you started:

In March of this year, the company released a video giving an update as to where they were in their journey. You can watch that video below:

Pay no attention to the numerous times that he points the gun at the guy next to him or at himself. Actually, do pay attention to that. There are, in fact, safe ways of showing a pistol to the camera without compromising any of the 4 Rules of Firearm Safety. It really drives me crazy when professionals in the industry break these important rules, and I don’t ever remain silent when I see it happen. I’ll end this little rant with their #1 piece of safety advice on their website:

Ok, so let’s get back to the pistol itself.

In the previous article on this pistol, I didn’t find it to be a gimmick. I genuinely believe that the creators saw an opportunity to allow people an easy concealed option, which IMO would be a great backup firearm. A last resort. With just two shots, it’s up there in the world of cane guns and umbrella guns.

I then think of where I’d put it if I were to carry it. My cell phone pocket is already filled with… my cell phone. My other front pocket is dedicated to my keys and a knife, so I’m not putting a firearm in there. That leaves two back pockets, and I can’t see myself ever personally carrying a firearm in a back pocket that I don’t have much control over. Back pockets are funny, because if you lose something from one, you might not notice it as much as if you lost something from your front pocket. Maybe that’s just me, but I can more easily realize that my keys are missing vs my wallet. Maybe that’s a personal problem that I need to resolve, but I still wouldn’t feel safe with a firearm in the rear.

That doesn’t mean that my setup is the same as everyone else. Everyone has different ways of carrying their things, of course. If a woman were carrying this in her purse, I’d say the same thing that I always say about purse carry; try to use it if no on-body carry methods are available to you with your particular attire.

So who hates it? Plenty of people, but mostly those who don’t like firearms. They see this product as an opportunity for disaster, given that it’s made to look like a cell phone. In the end, though, it comes down to the user. As always. If they’re responsible with this firearm, just as they should be with any firearm, there shouldn’t be any problems.

What’s my conclusion? It’s better to have one of these cell phone guns than nothing at all. At an MSRP of $395, you’d have to decide if it’s worth it to have. I would like to try it at some point, and maybe I’ll be sold once I’ve been able to see it in action.

Previous article: BREAKING: Lt. Colonel Oliver North Is To Become The NRA's Next President Next article: Another County In Florida Looks At Restoring Second Amendment Rights of County Workers