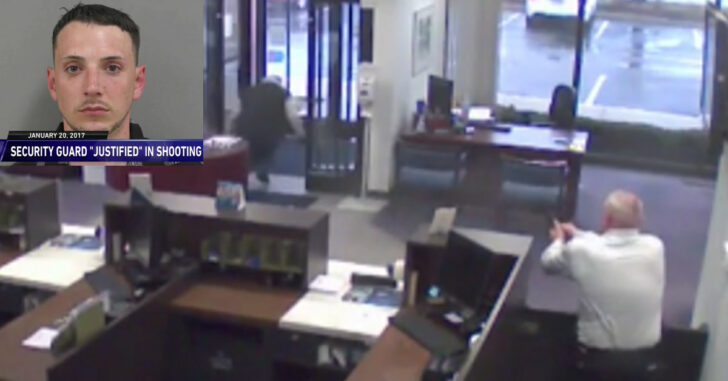 ROCKFORD, ILLINOIS — Moments after seeing an armed robbery suspect enter the bank, video surveillance showed an armed security guard take out his pistol and engage the suspect at close range. The harrowing encounter in Alpine Bank likely could have cost him and other people their lives but the security guard was able to take cover, engage the suspect, and shoot him multiple times. His actions are being credited with saving both his own life and those around him.

“There is no doubt in my mind the actions of Brian Harrison saved the lives of those that were employees in the Alpine Bank location on that date and saved his own life,” Winnebago County State’s Attorney Joe Bruscato, said.

The bank robber, now identified as Laurence Turner, was believed to be on drugs at the time and died as a result of gunshot wounds inflicted by the security guard.

We included a video of the surveillance footage to help pick out some of the things this security guard did.

In the video, you’ll see not long after the bad guy comes in the door and fires a few rounds off into the ceiling, the security guard gets some cover between him and the bad guy. While he’s doing this, he’s taking out his handgun. For both security guards and the average concealed carrier, the biggest chance of stopping a moving opponent is to aim center of mass. Center of mass is the biggest bullseye area and it doesn’t take too many hits in the center to neutralize a bad guy.

“They are taught generally to shoot center mass in the body. This is a very dynamic, fluid situation and he’s doing what he was trained for 30 years to do and it was eliminate and take care of the threat,” Rockford Police Chief Dan O’Shea said.

As you’ll likely note, the bad guy quickly realizes he’s coming under fire and moves for cover as well. Third: Minimize the area your enemy has to shoot you.

By using the counter as cover and only exposing himself enough to put rounds on target, the security guard uses the bad guy’s poor tactical decision to his advantage. He peeks around the counter just enough to get his gun on target and not a hair more.

By the time the bad guy realizes he has no cover and the security guard can shoot him without having to fear too much in return, he decides to run. By this point, he was likely shot multiple times and still has enough adrenaline pumping through his veins to get him out the door.

The bad guy had already been fatally shot by this point. His body just hadn’t caught up to that realization yet. It didn’t take long for his blood pressure to drop to the point he could no longer function. By the time police arrived, he quickly bled out and died.

These types of scenarios are a great instructional tool for gun owners, concealed carriers, and other security guards as it shows the reality of a defensive gun use scenario.