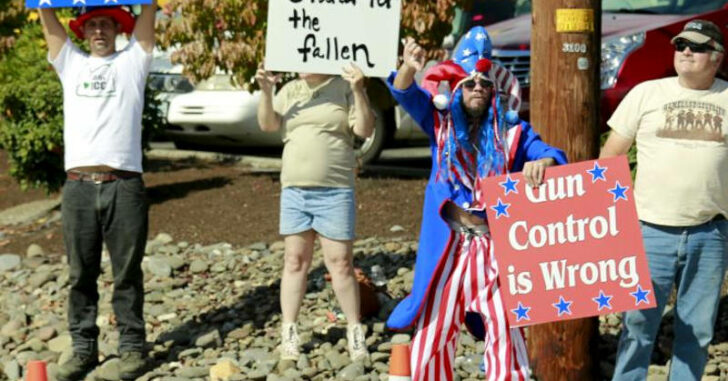 SACRAMENTO, CALIFORNIA — California Governor Jerry Brown was brave enough (*sarcasm*) to sign into law a measure which would effectively eviscerate any student or faculty member’s chance of defending himself with a concealed carry firearm.  Not a week after the Oregon shootings, Brown passed a measure which the CA Senate was hot-to-trot on since February.

Previously, California students and faculty with valid concealed weapons permits could carry their handguns with them on campus.  Now the measure requires each student or faculty concealed carrier to obtain individual permission from the institution itself — a process which will likely become the equivalent of trying to get a concealed carry permit from the State of New Jersey.

Gun control advocates applauded the measure as a fantastic way to ignore safety altogether and push everyone closer to “happy, feel-good” until the next school gunman arrives.

Thankfully, at least one gun advocacy group is fighting back.

Advocates for gun-owners’ rights, however, said the law would make people less safe. “Criminals will know that their intended victims are totally vulnerable when they’re on California school grounds because SB 707 will ensure that they’re defenseless against a violent attack,” Brandon Combs, president of the Firearms Policy Coalition, said, referring to the law by its Senate bill number.

It would be very convenient to simply say, “let’s ban guns everywhere — guns are dangerous.”  Reality has shown us time-and-time-again that criminals and the those bent on doing harm to others really don’t stop to consider the implications of when and where they use those firearms.  It’s law-abiding citizens who do.  And sadly, in the State of California, there is literally nothing stopping an armed gunman from waltzing onto any institute of higher education in California and committing heinous acts.

“Gun free” zones don’t apply to the dangerous and the deranged — just those who obey the law.

Previous article: The Yankee Marshal Calls For #carryeverywhere Except Committing A Felony. Unless You Really Want To. Next article: Here Are 5 Times Concealed Carriers Have Stopped Mass Shootings