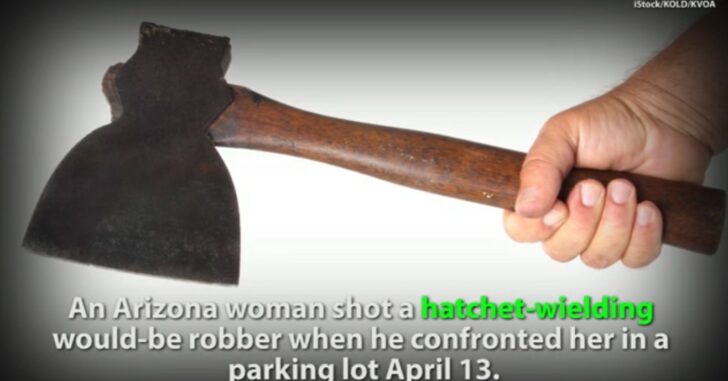 TUCSON, ARIZONA — A woman who was getting into her car was caught by surprise when a man approached her and demanded her keys. In one hand, he held a hatchet and seemed unafraid to use it.

This bad guy, who has not been identified, underestimated his female victim of choice because she was carrying a firearm. And she was definitely not afraid to use it.

The man, who has not been identified, walked up to the woman and demanded her keys as she got into her car around 8:40 p.m., according to KOLD. Instead of her keys, she grabbed her handgun and told him to leave, according to KVOA.

When he raised his hand with the hatchet, she shot him. She kept the injured man at the scene until police arrived.

I bet that was a rude awakening for this criminal. As he laid there bleeding, he was probably wishing that he picked another person to rob, or simply that he shouldn’t have robbed anyone in the first place. Either way, or neither way, this thug got a free ride to the hospital and charges are pending against him until he leaves.

There is no word on the condition of the bad guy, but it would seem that the woman escaped unharmed. She is probably very happy, also, that she decided to carry a firearm.

Let’s hear it for yet another guns saving lives story!