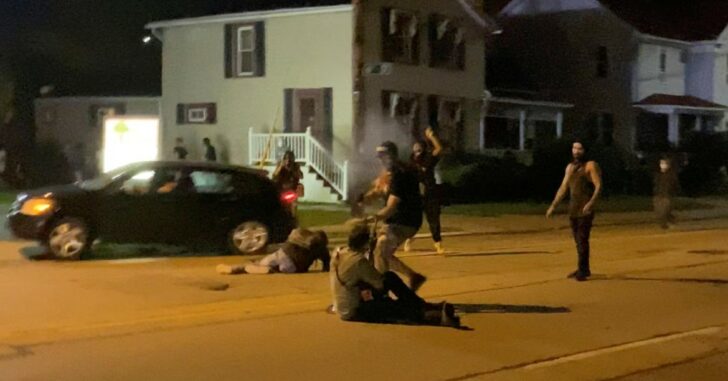 Details are still coming out about a pair of deadly shootings during last night’s riots in Kenosha, WI.

A total of three people were shot, with two of those people not surviving.

It began in a business parking lot, and it is unclear who fired those first shots. The shooting and immediate aftermath were captured on video, although it is difficult to see who fired the shots and what led up to the shooting.

The video below shows the immediate aftermath of the first shooting, with this victim being shot in the head and cared for by witnesses.

I will update who shot him! pic.twitter.com/xZ6v5mpI82

What is clear is that a person with a rifle is seen running from the scene, and people are chasing him after accusing him of being the one who opened fire moments before.

This man is tackled to the ground, and winds up opening fire on multiple people who were attacking him. At least one of those people was armed with a handgun.

The chase and resulting shooting can be seen below. Pay attention to the sounds of gunfire, and you’ll notice that the man defending himself fired the first few shots, but then another round of gunfire comes from a different location. The source of this second round is unknown.

(Warning, Graphic/Violent)
A crowd chases a suspected shooter down in Kenosha. He trips and falls, then turns with the gun and fires several times. Shots can be heard fired elsewhere as well, corroborating reports of multiple shooters tonight #Kenosha #KenoshaRiots pic.twitter.com/qqsYWmngFW

One of the men who was shot, in the arm, was carrying a handgun in his hand at the time he was shot. The video below is extremely graphic.

Here’s video of the man’s wounds, I recorded him being shot in Kenosha. His right arm is badly damaged. Credit: @ louriealex (instagram) pic.twitter.com/iE8vUG27mb