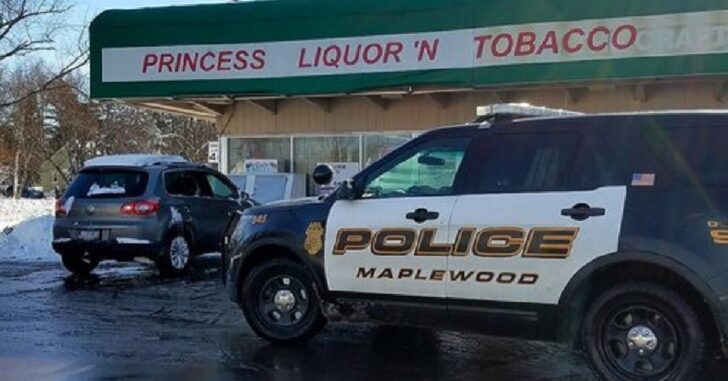 MAPLEWOOD, MN — A pair of would-be robbers got the surprise of their lives when the two of them were faced with an armed employee ready and willing to defend himself.

Not only did they not get what they were looking for, one of them even lost their life in the process.

Maplewood officers were called to Princess Liquors shortly before 8 p.m. Monday. Authorities say two suspects attempted to rob the liquor store and began to assault one of the employees.

Another employee confronted the suspects and fired a gun, striking one of them… both suspects fled the store, but police located one of them a short distance away with a gunshot wound. He was transported to Regions Hospital, where he later died.

Maplewood police later identified the suspect who was shot and killed as Willie Young-Ferba, 23, of Chicago who was reported to have have very recently moved to Maplewood.

The department said the employee-owner of the liquor store who was assaulted, is expected to recover from his injuries. The employee-owner who shot Young-Ferba does have a permit to carry a firearm, the agency added. The other suspect remains at large. The investigation into the shooting continues.

Something about Chicago and crime — somehow they get an honorable mention when the crime isn’t even in the same state!

It’s not every liquor store that will let their employees carry — in fact, because alcohol regulations are so varied from state to state, where it’s legal to be armed where alcohol is stored really depends on where you’re spending time.

As with carrying while working — which you all should do, if you can — you must check and see if carrying in liquor stores is permitted in your area.

I hope it is — the employee won’t always be armed.